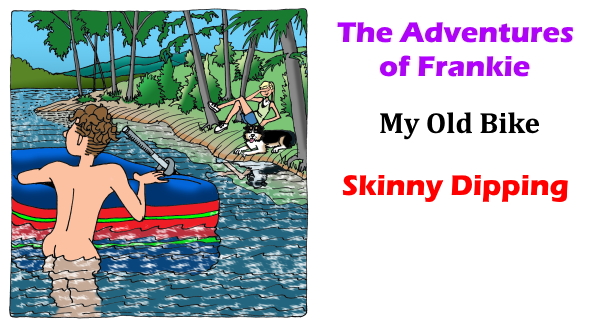 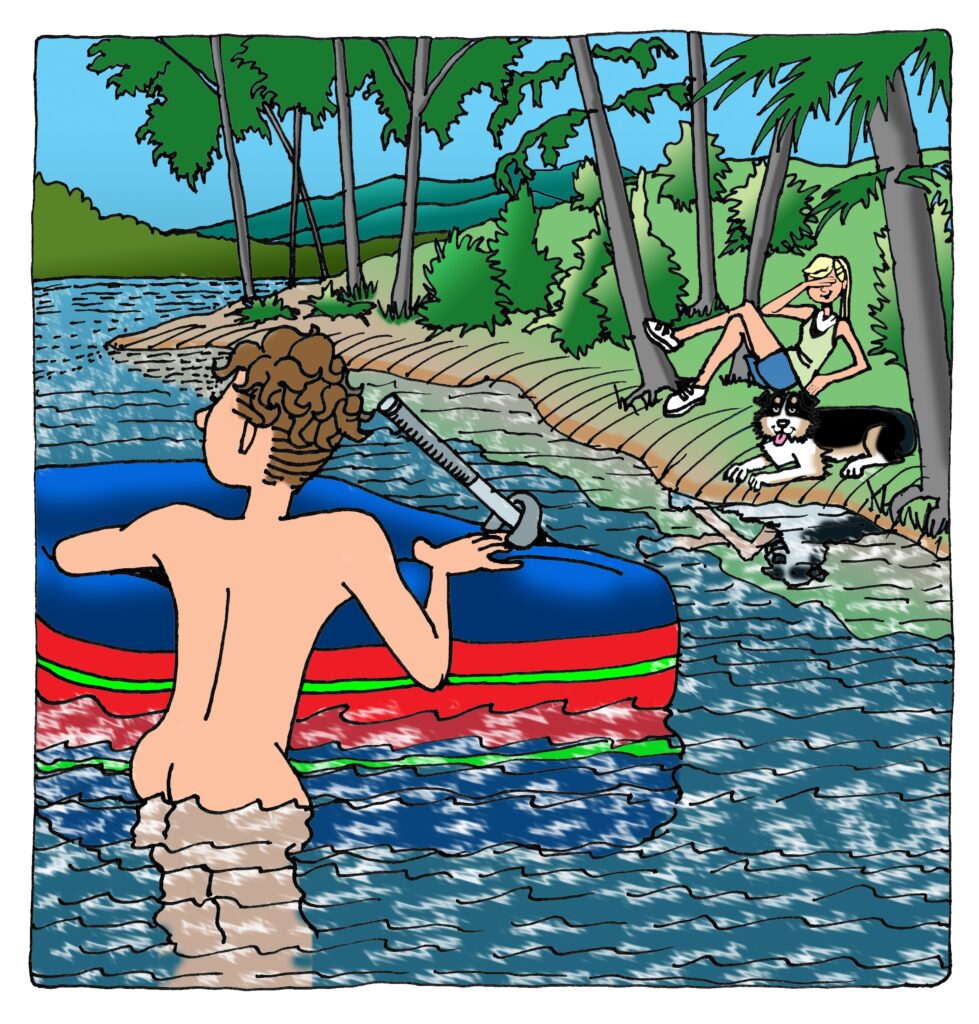 Paulette kicked a pine cone down the wooded path along the river as Penelope chased after it, kicking up dust with each of her fuzzy paws. This was the shortcut to her best friend’s house. Rita the Red Head lived on the wrong side of the tracks in one of the ramshackle shanties on the thin strip of land between the banks of the river and the railroad tracks.  Paulette, Frankie and Scrawny Ronnie’s neighborhood wasn’t exactly upscale either; the big expensive McMansions were on the other side of the river.

Penny, as everyone called her, placed the makeshift toy just in front of her master then bounced around, waiting for the telltale sound of Paulette’s sneaker making contact. But she stopped in mid-kick at the sound of voices. A smile grew when she recognized that it was Frankie. Just then something in the river caught her eye. Closer inspection and a smile stretched across her face.  She crouched down, Penny turned to see what new game they were playing. Grabbing a stick, Paulette reached for what had to be Frankie’s swimming suit before the current washed it down river.

Spying upstream just a few yards, Scrawny and Frankie clung to the side of Ronnie’s rubber boat. Penny turned to look up at Paulette then in the direction the familiar voices, ears turning like mini satellite dishes. The boys froze when her giggle gave her away. No sense hiding any longer, Paulette hung the swim trunks on a branch out of sight and proudly stepped into the opening as Penny ran to the water’s edge, all four paws sinking into the mud. Ronnie grabbed his swim trunks out of the little boat and worked them up his legs then hugged the side of the before his head went underwater as he worked them over his butt. Frankie’s free hand searched and searched to no avail. Paulette didn’t even try to hold back a snicker as Frankie’s panic rose.

“Very funny Ronnie! Give it back!”

“Seriously dude, I don’t have it!”

The boys were losing it.

“RONNIE!” If he wasn’t already freaking out, surely Frankie would have heard his father in his own voice.

“Is there a problem, boys?” Paulette out right laughed.

“This isn’t funny Ronnie, stop kidding around!” This time he did hear his father in himself.

Ronnie glanced at Paulette then ducked back behind the boat to whisper, “Hey man, I’ll run home and get another swim suit.”

Paulette pretended to get comfortable on the bank as Scrawny raced across the clearing. Penelope settled in next to Paulette, head turning like an owl to follow Ronny as he headed up the path back to their neighborhood.

“So, whatchya doin’ there?”

She tried to peek around the side of the little rubber boat. Frankie pulled it close to make sure he stayed hidden then mumbled something she probably shouldn’t hear. Looking around she noticed their fishing polls, obviously they didn’t have any lines in the water.

“I’m sure Ronnie will be back shortly with another pair of swim trunks.”

Frankie’s mouth dropped open as his head sunk behind the boat. How did she know?

“How come you’ve never taken me fishing? Are there any fish down there?” Looking up at the sun high in the sky she continued teasing Frankie. “Oh, maybe they’re not biting this time of day?”

Now Frankie was feeling less like his father and more like his mother, rolling his eyes at her bad joke. Then his eyes widened as his free hand darted down for protection.

He couldn’t tell what she was doing, but clearly she wasn’t sitting on the edge of the river any longer.

Still afraid to peek, he called from behind the boat, “Hey, stay where you are!”

Paulette retrieved the suit from her clever hiding place then stood at the entrance of the clearing, waiting to wave off Ronnie as soon as he charged back down the path with Frankie’s replacement shorts. Finally she returned to the water’s edge and settled back onto the bank. Penny quietly took her place beside her once again.

“Let me see your fingers,” she demanded.

“Hold up your hand.”

Frankie complied, what other choice did he have?

“Yup, nice and wrinkly, you’ve been in there long enough.”

Paulette tossed the trunks into the boat. He snatched and slipped them on then emerged from the water, head hanging low, red faced, and dragging the little rubber boat behind.

“Yeah right, Scrawny’s gonna have a field day with this.”

“Not a chance,” she tossed her hair to the side with one hand as she let her eyelids droop with an evil little scowl, “If he says a word to anyone, I’ll tell them that he threw your trunks over the side.” 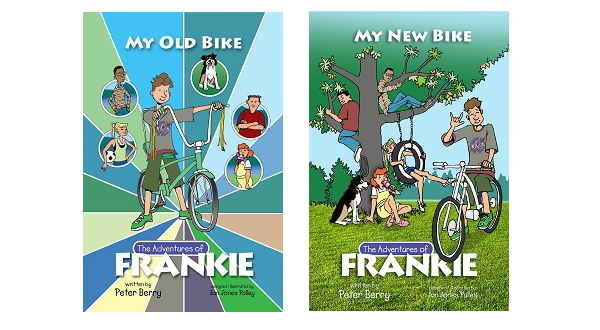 Please consider supporting the author by purchasing the paperback of The Adventures of Frankie – My Old Bike!
Click here to buy on Amazon.com