From the Netherlands to NC

Seventeen-year-old Marie-Claire Evers transformed her life last fall as she traded her home in Almere, a city in the Netherlands, for a 10-month experience in Person County, where she is completing her senior year at Roxboro Community School (RCS).

Evers has ties to Roxboro, through her mother, who lived here for the first 23 years of her life. Years ago, her mother chose to study abroad as well, leaving Roxboro for Holland, and making her home there. As a result, Evers said, she had wanted to study in different countries for as long as she could remember, but especially in America, where her mother grew up.

“When my senior year in Holland came, I really had to choose what to do next, so it seemed [like] the best time to go,” she said.

Evers has one sister, named Isabelle, who is 20 and in her first year of college at the University of Amsterdam. “We are very close,” said Evers, so her sister is not happy about Evers’ decision to come to America, “but understands. She wants me to be happy.”

“Roxboro is like a second home to me,” said Evers, who has come to the U.S. to visit her mother’s family during the summer at least 15 times. Because of this, the decision to uproot her life is less daunting than it may seem. 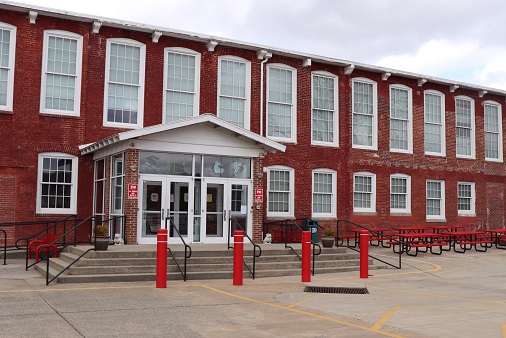 Evers said that she made the decision to attend RCS for several reasons, but first and foremost because the Yarboroughs’ daughter Bryce attends RCS. Evers also likes the school’s smaller scale. “Besides,” she said, “it just feels like the right school for me.”

Previously, Evers attended a school focused on the arts, referred to as The Arte College, which is located about five minutes from her home in Almere. Like most kids in Holland, she was used to biking or walking to school every day. The Arte College, according to Evers, is a new type of school in which classes are held in open spaces. “This means that two or three classes can go on at the same time, in the same space. Sometimes it is hard to focus because there are always distractions,” said Evers.

Evers has always attended public school, so her core classes have always been in Dutch, her first language. She was raised bilingually, however, because her mother spoke to her in English.  [My mother] used to read to me in English every day, but my dad always spoke Dutch. I could switch back and forth between languages by the time I was about five years old,” said Evers. In addition to speaking Dutch and English, Evers said she also had one year of German.

Her favorite pastime is playing field hockey, an important sport in Holland. Many kids there begin taking lessons at a very young age. In her hometown of Almere, there is a field hockey club with about 2,000 members. “I would have practice three times a week, with games on the weekend,” said Evers.

In addition to field hockey, Evers has some experience in modeling. “When I was 15, a scout approached me while I was in town shopping,” Evers continued, but “modeling isn’t really my passion, I would rather be on the hockey field, [so] I don’t do it very much.”

She hasn’t been able to play field hockey here in Person County, but after spending several months here and dealing with her initial culture shock, Evers said the easiest part of adjusting has been that her life in Holland always seemed to align with the lives of teens here in Person County.

Evers will only be in Roxboro for 10 months, so she wants to “make the best of it and get the most out of it that [she] can.” As planned, Evers returned home for Christmas, an event she described as an “emotional” reunion that she had been looking forward to. “I was in Almere for two weeks,” Evers went on to say. “It was a change for me to go from a bigger city to a smaller town like Roxboro, but after six months of living here, I got adjusted. It felt weird to be back in a big city.”

Evers is thankful to classmates for the opportunity she has been given “to be with [them] and to go to school at RCS.” However, Evers said that the American way of schooling is “extremely different,” adding how “tough” it was to get used to at first. “My vocabulary expanded unimaginably. After three weeks, I got used to everything, and it got easier. All [of my] teachers would help if I did not know a word,” she said. Evers went on to explain that it had taken some time for her to get used to “having the same classes every day,” whereas in the Netherlands, her schedule ran on a weekly basis. Despite these academic hurdles, “the hardest thing I had to get used to was coming to school at 8 a.m. every day,” said Evers.

“[My] second semester has been good so far, but I am ready to graduate and finish high school,” she expressed. Evers is now contemplating her next move. She has been accepted at Salem College and High Point University. “I also applied to the University of Applied Science of Amsterdam, but [their response] will take a while,” continued Evers. She stated that Amsterdam and High Point are her top choices, concluding that, “these are exciting, yet nerve-wracking months.” As for the not-so-near future, Evers plans on finishing college with a bachelor's degree, and eventually obtaining a master’s degree in law as well.

Meeting new people and learning new things has been exciting for Evers, as the experience has been one that she would “be willing to do all over again.” However, missing her family has created a desire to return to the Netherlands after high school.

Concluding, Evers said that, “10 months have been fun, but enough.”

Calling all high school students that live in or visit the area around Hyco Lake… we pay you for your stories! Visit www.HycoLakeMagazine/article to send us your article.