SUMMER THEATRE: There is not a Bad Seat in the House!

Update May 5, 2019: Read the next story about The Prizery 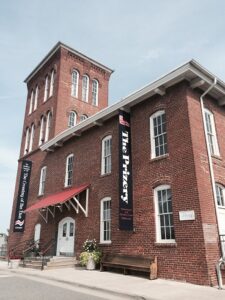 Already attracting the attention of people in and beyond Halifax County, in the summer of 2010, after much preparation, sweat, fund-raising, a new program was launched: SUMMER THEATRE.  The first season consisted of the plays Dames at Sea, Annie, and All Night Strut.  Thus, Professional Summer Musical Theatre came to the Prizery.  Two dozen professional actors, singers, dancers, technicians, and choreographers descended on South Boston for the months of June, July, and part of August. Coming from all over the Southeast, they were housed in local homes and other accommodations to live and played among the town folk.  But above all they brought the three above mentioned plays to life in the Chastain.  Fast forward to 2018 and the 9th Summer Season approaches.  A patriotic review called Red, White, and Broadway, Gypsy, and the 75-year-old Oklahoma will be the bill of fare.  Over the past summers Into the Woods, The 39 Steps, Seussical the Musical, Godspell, The Sound of Music, Anything Goes, The Addams Family, and an absolutely unbelievable production of Les Miserables.  Chris Jones picks the shows mixing the standards, the new, and always the entertaining.  Old and young alike find the magic of the theater here.  A certain 3-year-old saw her first live play here and had to see it twice. 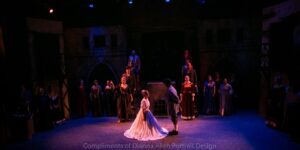 Sitting talking with Chris Jones in his office in the Prizery on a beautiful spring afternoon with sunlight pouring through the windows of the repurposed tobacco building from South Boston’s brightleaf heydays is in itself a cultural experience.  Surrounded by the props from previous plays and other items in the creative clutter, photos of former cast members, head shots of the upcoming summer cast scattered on a work table that also holds the “books” of Oklahoma and Gypsy (this summer’s offerings) it is easy to recognize a very passionate and creative individual of the arts.  Chris, who started life in Halifax County as a farm boy, was early on introduced to the music of Porter, Gershwin, and British Choral music; this began his lifelong passion for the arts.  While studying theater at East Carolina University, Chris soon found himself on the way to Atlanta to serve as an apprentice at the famous Alliance Theater. In the late 70’s, he enrolled at the Shenandoah Conservatory of Music where he studied piano.  Working in sales promotion for the Belk-Leggett organization, Chris used his creative talents on the job, but also stayed in close contact to arts by teaching voice and piano lessons, which in fact he still does. 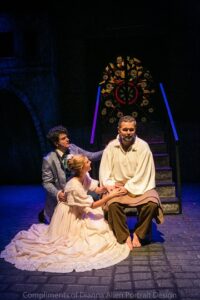 With the move of Belk-Leggett headquarters to Richmond, Chris made the decision to stay in Halifax County and deepen his commitment to the cultural life of his hometown.  He was very active in all aspects of the local theater group while running his own business.  He became a member of the Community Arts Center Foundation, a volunteer-led organization involved with the revitalization of the Historic Tobacco Warehouse District.  When John Cannon and Eva Harris donated the old tobacco warehouse to the CACF, the wild idea of turning it into a community arts center took hold.  With one and a half million dollars raised by private funds, plus a matching amount from the South Boston Town Council and the Halifax County Board of Supervisors, followed by a generous two million in historic tax credits, the wild idea started becoming a reality.  Chris served as the president of the CACF and chaired the Architecture Committee, working closely with the architects in the renovation process.  “I have always been interested in how the different art pieces could work together. This is what is happening at The Prizery.”  Chris is quoted as saying in 2003 newspaper article. 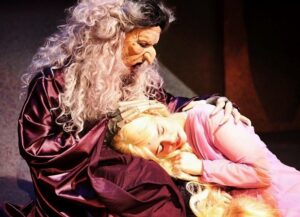 The donated four-story building had been used as a place where tobacco was “prized”.  This was a process where tobacco was pressed into layers inside of hogshead barrels resulting in weights of up to 1,000 pounds.  Barrels were taken to the nearby railroad where they were shipped out.  The Prizery is on the National Register of Historic Places and sits overlooking the Dan River. 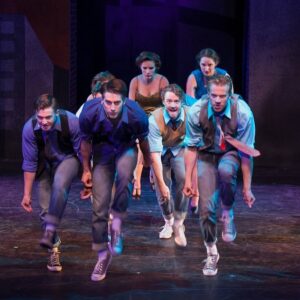 A 1907 map from the Sanborn Fire Insurance Company indicates that it was a three-story building with a cooper shop in the basement for making barrels to hold processed tobacco; first floor used as a storage area, second floor for receiving, and the third floor used for drying.  The most striking feature of the building is the four-story Italianate Tower that stands at one corner.  The tower makes the Prizery one of the most distinctive buildings in the once thriving warehouse district. 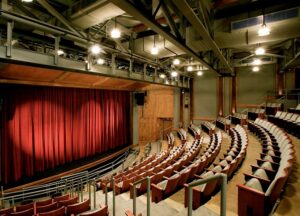 With renovations complete, the 38,000 square foot building contains a Welcome Center, a 250-seat performing arts center known as the Chastain Theatre, the Robert Cage Art Gallery, space for art, dance, voice, and music lessons, rental venues for special events, including a 400-seat banquet hall.  The top floor is the home of the Halifax Historical Society permanent interpretative exhibit of the Crossing of the Dan, a vital part of the Southern Campaign of the American War for Independence.  Elevators make the building easily accessible for all. 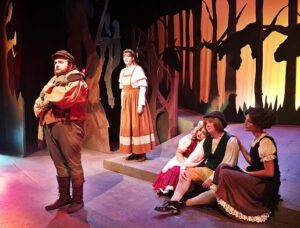 The first-floor lobby serves as the Welcome Center with walls adorned with photographs from the days when South Boston was a tobacco center.  From 1935 through 1941, South Boston hosted the American Tobacco Festival.  This event was attended by Hollywood entertainers and politicians from all over the United States. This event would attract upwards of 100,000 people to this small city with a population of only 5,000.  Even America’s first “Sweetheart” of the silver screen Mary Pickford made an appearance.  The history in photos is well chronicled on the walls.  Also, a centerpiece of this area is one of the large presses used in the prizing of tobacco, a reminder of the original intent of the building and nod to the name.  Taking the elevator down leads to the art gallery, classroom space, rehearsal spaces, and an entrance to the Chastain Theatre.  The theater is also accessible from the lobby, but with stadium seating style the aisles can be quite steep.  This style seating assures the theater that no matter where they sit, there is not a bad seat in the house. 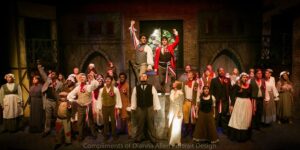 Serving as the first Executive Director of the Prizery, Chris set about to do his part in increasing the quality of life of the area. “It’s all about quality of life.  If we are going to compete with other places to get businesses and people to move to this area, we got to address quality of life.”  This quote appeared in a 2003 article of the Danville Register and Bee.  Under Chris’s direction, the Prizery set up a performing series including well known acts such as Sandi Pattie and the Vienna Boys Choir among others.  Serving as the Executive Director and Artistic Director, Chris quickly became the face of the growing arts movement in the area. 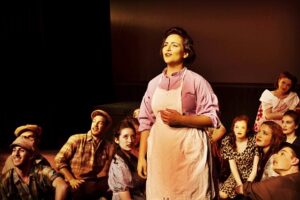 The Southeastern Theater Conference held every year in late winter has been the source of much of the casting.  Held throughout different cities in the Southeast each year of 4,000 actors, singers, dancers, designers, technicians, stage managers, directors, playwrights, teachers, and drama majors celebrate the art of the theater.  Theater companies from all over, theme parks, and other performing venues are here to audition talent to fill their summer seasons.  Over the years Chris has made some pretty good choices as now two former summer cast members are in the first National touring company of Hamilton.  Others have gone to New York performing as Rockettes, and landing jobs in other touring companies as well.  Others have had starring roles in musical theaters in larger regional theaters including several in production in Branson Missouri.

Plus, local talent gets it chance as well.  Many young local actors have grown up on the Prizery stage in the past 8 summers in performances in Oliver, Hairspray, and many others.  Two of these young men are currently pursuing their interest in theater art in national known centers. 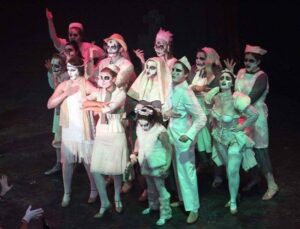 Sometimes they come back for more than one summer season, but this year it is all brand new.  The company includes kids from Florida to Illinois to Kentucky and Tennessee who have never been here before.  This summer like many other times this is the first professional job for the company member.   Chris’s face breaks into a broad smile when he talks about how “tickled he is to give the kids that first job.”  There is nothing like being in an audience there when friends and family have traveled in and are sharing that first professional performance.  Chris also takes great pride in having families and friends see what a great experience the kids are having and how well cared they are for and how the community embraces them. 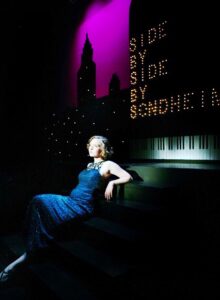 From an old building where tobacco was “prized” and sent out, to a thriving performance, teaching, art center, that building on the hill is full of magic. It now stands majestically as a testimony that with great partners, dedication, hard work, and persistence, even a small Southern tobacco town can become a cultural center where great talent is given that first start, people in the community and surrounding areas can be uplifted, entertained, and inspired.This is the stuff of dreams becoming a reality. The stuff of greatness.  The CACF depends on their partners the Halifax County Little Theatre, the Parsons-Bruce Art Association, the Southeastern Virginia Higher Education Center, and the Halifax County Historical Society.  And of course, its many contributors in businesses, civic organizations, and private patrons.

So, find time one of the beautiful nights in June and July, load up your surrey with the fringe on top, and let them entertain you.  Bet you can’t just once. By the way, that 3 year old was my granddaughter, and I will never forget her sitting there throughout the entire production and being so excited to meet Dorothy after the show. She has been singing and dancing since.  May be one day she will perform in that magic building on the hill.

Tickets for all Prizery events can be purchased online from the Prizery website www.Prizery.com or at the box office.