While the Commission is disappointed that a Red Drum fishery is not feasible in Hyco Lake, that is not the end of the story!!!!

The Red drum have made it to Marion  where they are growing out ....they are now about an inch and a half long the are getting used to fresh water now.  we have 360+.  Great progress.   We will be catching another 300+ larger fish out of inland waters sometime in September and then will acclimated and then a stocking time will be scheduled. 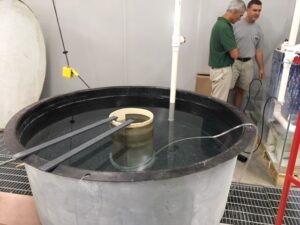 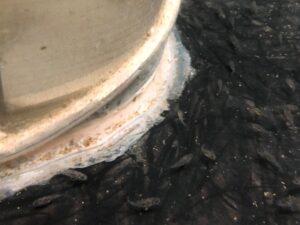 Making progress, but still a ways to go! 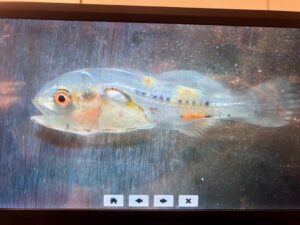 Our Red Drum are alive and well! 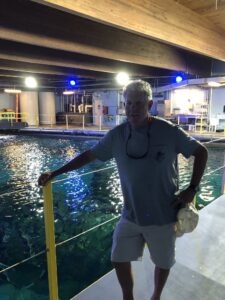 Tom visited Pineknoll Shores Aquarium where they have hatched our Drum. 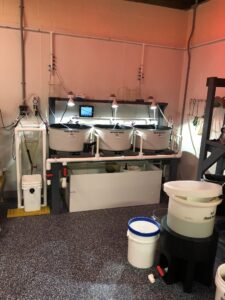 Making sure they can live in Hyco water. 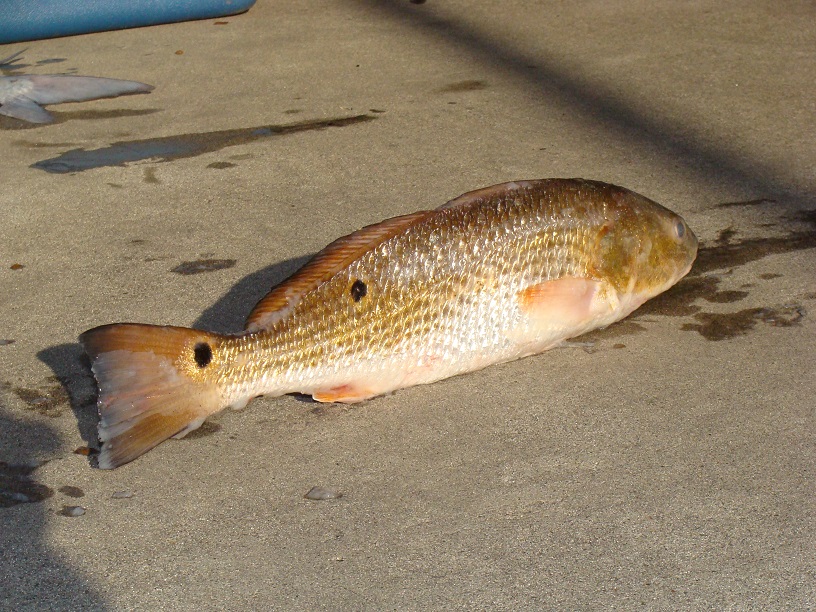 Wonder how many fishermen have sat in their boats on Hyco Lake dreaming of that really big catch? Not just thinking about that trophy catch but also thinking about that fish that will give them a good fight and also reward them with a good meal. The red drum also known as the channel bass, redfish, puppy drum and spottail bass, and the state saltwater fish of North Carolina fits that bill to a T. But how can you catch a saltwater fish in a freshwater lake?

But for more than 30 years’ lakes Braunig and Calaveras have been stocked by the Texas Parks and Wildlife Department with millions of red drum or as they call them redfish. Many of these have grown quite large to give these lakes a reputation as being just as good as the ocean to catch a monster fish. Red drum, unlike a lot of other saltwater fish, are able to survive and grow well in freshwater as long as the water is warm and there is a good supply of calcium. Both of these Texas lakes were formed from the construction of dams to provide cooling ponds for power plants much like Hyco Lake. 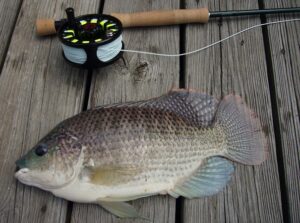 Interest in introducing the saltwater Red Drum into Hyco Lake has been around for several years. Studies from the spring of 2013 confirmed what some fisherman and wildlife personnel had suspected for a while: the bass population was below average in number and size in comparison with other lakes in the area. Similar studies in 2015 revealed the same findings concerning Black crappie. The overall quality of fishing in Hyco Lake was on the decline, and this decline was attracting attention from not only sponsors of fishing tournaments but also many individual fishermen and residents as well. North Carolina Wildlife Commissioner Tom Berry, also a home owner at Hyco, began to raise a concern. Research and background work had begun earlier and members of the NCWRC were aware of the success of the program began in Texas in the 80’s to stock lakes there with red drum. They were also aware of the continued success of that program. Research by the NCWRC showed that three important elements were necessary for red drum to survive in freshwater lakes. Those three things are a tilapia population that would provide sufficient food for the red drum, minimum water temperatures, and minimum levels of certain minerals such as calcium in the water. From initial test and observations, Hyco Lake possessed all three criteria. Excitement began to build around the project within the commission, and their next step was to plan a public meeting on a potential red drum fishery in Hyco Lake. The meeting was set to be held on March 12, 2016.

February 12, 2016 the North Carolina Wildlife Resources Commission issued a news release announcing the meeting to be held at the Hyco Lake Community Center at 3: p.m. on March 12, 2016. The stated purpose of this meeting was to discuss the potential for establishing a red drum fishery at Hyco Lake. The release went on to announce that Commission biologists would be present to give an overview of the current fisheries and give reasons why Hyco was considered a suitable source for red drum stocking. It was also a chance for local fishermen and residents to hear the plan and participate in a discussion after the presentation. The commission early on recognized the value of local input. In less than a week, the story was beginning to spread across the state. The Carolina Sportsman ran the headline RED DRUM FISHING – ON HYCO LAKE. Newspapers from the local counties to papers as far away as New Bern in the east and Charlotte in the west ran stories about the upcoming meeting. It was more than just a local interest story. Message boards relating to fishing were lighting up all across the state. There was a great deal of interest in this possibility and also a great deal of skepticism being expressed on the part of fishing enthusiasts all across the state. 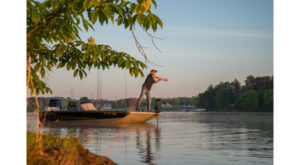 At the March 12, 2016 meeting, the following members of the NCWRC were present Tom Berry, Kyle Briggs, Corey Oakley, Christian Waters and fisheries biologist Jessica Baumann. Baumann conducted the presentation and the commissioners spoke in regard to the proposed project. Mr. Waters, the chief of the Inland Fishery division, spoke to using the tilapia as a food source for the red drum thus helping to control the population of this nonnative fish. Tilapia came to be in the lake as results of being used as bait fish for other game fish or as the Carolina Sportsman reported when a large number of the fish escaped from cages in which they had been housed as part of a research study. No matter how they came to be there, now they were presenting a great problem. The water temperatures which will help the red drum to survive were what helped the tilapia thrive so. The tilapia eat vegetation which other fish such as bass and crappie use as spawn areas and also offer protection for the small fish. In addition to affecting the favorable environmental conditions for these other fish, they are also quite aggressive toward other fish and often feed on the young fish. Biologist Jessica Baumann identified the tilapia population as being a major factor in the decline of other fish. Here the introduction of red drum would offer a twofold advantage. With the tilapia population declining, bass and crappie would once again have the environment to spawn and have a chance for them to grow to maturity. Also, there would be a greater food source for the two. An added benefit would be the introduction of a great game fish into the lake. Red drum in freshwater can reach in excess of 30 pounds.

Tom Berry was quoted by the Carolina Sportsman as saying that this project has not been taken lightly. “A whole lot of thought and study went into this, to do something about the abundant tilapia population, which is adversely affecting the size and numbers of bass, crappie, and other gamefish.” 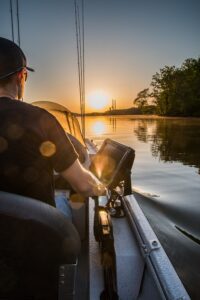 Those attending this meeting were polled at the start of the meeting and at the end of the meeting. At the meeting start 58% were in favor of the project and by meeting’s end that number had risen to 84%. Locals who live on the lake, owners of lake houses, and fishermen were among those in attendance. Concerns were raised over the possibility of the red drum population following the same track as the tilapia population. This was addressed by the fact that while red drum could lay eggs in the lake, these eggs would not survive. They would not be able to float because of the less than minimum solubility of the water. Thus, restocking would be the only way to increase the population of red drum. This has also been the case with the lakes in Texas. According to Berry there is no downside to the project. “The drum we introduce will either be caught or die, and there just won’t be any more (without restocking), and at worst, we’ll end up right where things are now.”

This was the status of the project following that meeting. The commission then began the work of surveying the largemouth bass and crappie and monitoring the lake’s water quality. As this is not an inexpensive process, they wanted to make sure that Hyco was indeed the match it appeared to be. This past March 12, another public meeting was held at the lake community center. Lake Authority Board member, Barry Joyner said that this was a very well attended meeting and that there was a high level of interest among fishermen and other residents. Fishery biologist Corey Oakley and Kelsey Brian conducted the meeting and attendees heard that Hyco was once again regarded as a high-quality lake and the procedure for stocking was outlined.

They explained that various size drum would be in control cages to ascertain which size has the best survival rate. As it is a multiple agency and expensive project, it takes longer to implement. Since March work has continued on the project. This is the latest update from an email from Kelsey:

The idea for the Red Drum project started years ago after the Commission learned that Texas had successfully established freshwater Red Drum populations in two lakes. After speaking with the biologists from Texas we learned that in order to do this in North Carolina the lake had to meet certain temperature and calcium or water hardness requirements. Hyco Lake was chosen because it is a cooling reservoir meaning the power plant effluent supplies warm water year-round and increases the water hardness. Initial water quality assessments have revealed that additional testing is required before we can stock Red Drum, if at all. Mainly, we need to conduct tests to determine survivability of stocked Red Drum given the water quality parameters observed at Hyco. Thus, we are currently determining how to conduct these tests. Ultimately, stocking may depend on these results, so we do not have a projected stocking date or year at the time. We are concurrently working out our hatchery logistics for rearing and transitioning larval Red Drum, so that we can continue to move forward. 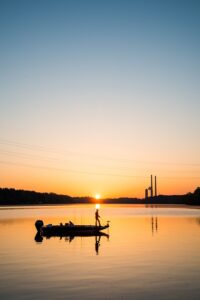 Thus, the project moves forward. Just maybe one day there will be red drum fishing tournaments held not at the coast but here at Hyco Lake. Maybe that fisherman who can’t find the time for a trip to coast to get that prize catch can do so right here in his backyard. The North Carolina Wildlife Resource Commission is certainly giving its best shot to make sure this becomes a reality. Tom Berry continues to be one of the most ardent spokesman and believers in this project along with many other commission members and lake home owners. Oh yes and don’t forget all the fishermen far and wide on all those message boards out there. They are still debating whether or not it is going to happen but making sure the issue doesn’t fade.

If all goes as planned with this project and the outcome is as favorable as that in Texas, Hyco Lake may once again be that special fishing destination it once was attracting anglers from all over. This would be a greatest tourist attraction as well. It is not everyday you find a lake stocked with fish you could normally only find at the sea.

And all those fishermen sitting out there on Hyco dreaming of that big catch. You better wake up, you might just have a big one on the line soon. Better get ready to catch drum.

Special thanks to Kaleb Page with Catch The Fever, maker of the Big Cat Fever Rod Series for helping to make the cover and inside pictures possible, CatchTheFever.com

We would love to hear your questions or comments, please direct them to NorwoodWalker@HycoLakeMagazine.com