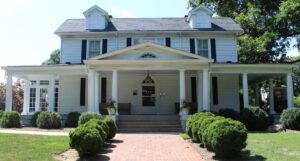 The main building of the Person County Museum of History was built by W.W. Kitchin, former North Carolina governor. The Colonial style home was built in 1901.

A visit to the Person County Museum of History is an architectural, as well as historical, delight. The campus includes eight buildings that were constructed between 1810 and 1922. They range from log walls and dirt floors to intricately patterned parquet flooring circa 1901 and detailed trim work.

The former Male Academy, built in 1842 and listed on the National Register of Historic Homes, features a cut-out displaying wall construction of hand-cut laths and hog and horse hair plaster, to give visitors a view of construction materials and practices of the time. 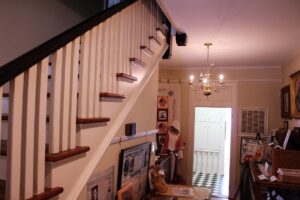 The banister in the W.W. Kitchin house, the main building on the Person County Museum campus, is short by today's standards. It was built that was to accommodate Kitchin's wife, Roxboro native Musette Satterfield, who was barely five feet tall.

According to the National Register, the building is “among the oldest structures in Roxboro,” and has undergone several additions and renovations over its long life. These changes include the addition of a second floor, a “Colonial Revival front porch” and “a stair and two mantels inspired by the same style.” 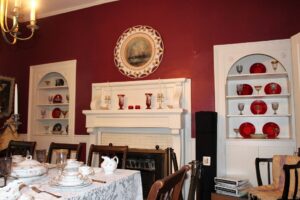 In the Kitchin house, niches on both sides of the dining room fireplace display 10 goblets with blue trim (Button and Daisy pattern), 12 ruby crystal plates, and eight crystal gold-trimmed dessert compotes. The ruby vases on the mantle are possibly Bohemian.

The National Register nomination form also states, “The trim found in the six rooms of the house’s two-story sections reflects Greek Revival, Italianate, and Colonial Revival influences... The structure thus provides an interesting reflection of the changing tastes in domestic design that piedmont North Carolina witnessed during the nineteenth and early twentieth centuries.”

The Methodist Episcopal Church purchased the building in 1854 and used it as a parsonage until 1915. The building nowadays is commonly referred to as “the Parsonage.” 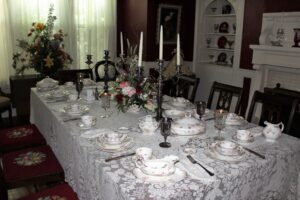 In the main building of the Person County Museum of History places are always set in the Victorian Dining Room, courtesy of a donation from the Aubrey Lee Brooks family.

The museum purchased the home in 1999 and performed extensive restoration. It currently houses the Sappony Indian room, three African American history rooms, and the J.A. Long room. Long is considered the “father” of modern Roxboro.

The museum’s main building is a colonial home constructed in 1901 by W.W. Kitchin, who served as North Carolina’s governor from 1909 until 1913. Kitchin’s wife, Roxboro native Musette Satterfield, was barely five feet tall. The ornate staircase leading from the foyer to the second floor features a short handrail that was built to accommodate the woman’s small stature.

The foyer and hallway floors are original oak parquet. Glass double doors open onto two front rooms that now house exhibits including an Estey Chaplain’s Portable Pump Organ made in the early 1940’s and used during World War II. 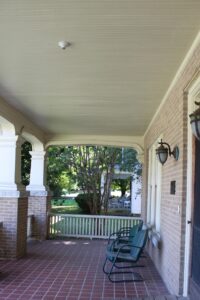 Ruffin Woody recalls his parents sitting on the wide front porch of their Main Street home, watching people passing by. The home, which features the original terra cotta porch tile, is part of the Person County Museum of History campus.

The main building also features a Victorian Dining Room, courtesy of a donation from the Aubrey Lee Brooks family. The dining room table was made in the 1930s. It seats eight and is made of oak with a dark brown glaze. The Hepplewhite style dining chairs each have a different needlepoint pattern.  The table is set for a formal dinner, with Warwick and Haviland china. The flatware was made from silver dollars Brooks collected and sent to the Wallace Company in 1920 to have made into knives and forks and monogrammed for his wife, Alma, as a gift. Brooks did not have enough silver dollars to have spoons made.

In the niches on both sides of the dining room fireplace are 10 goblets with blue trim (Button and Daisy pattern), 12 ruby crystal plates, and eight crystal gold-trimmed dessert compotes. The ruby vases on the mantle are possibly Bohemian, according to museum director Kathy Young. The oak barrel-back chair beside the fireplace dates around 1885 and displays a Japanese silk-threaded throw.

Exhibits in the main building are dedicated to Baseball Hall of Fame member and Personian Enos Slaughter and Oscar Scott Woody, a Roxboro native who perished aboard the Titanic. 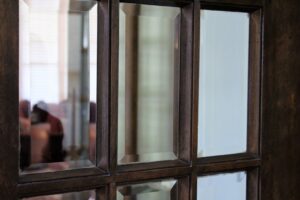 The Curtis E. Long Memorial House, originally the home of Walter R. and Annie Laurie Barnette Woody, boasts beveled glass double doors leading to what Ruffin Woody recalls as the "piano room" because that was where he was forced to take lessons.

The Curtis E. Long Memorial House was added to the campus in 2013. A private donation allowed the Museum to honor Long, a loyal son of Person County. Well-known architect George W. Kane designed and built the house in 1922. It was originally the home of Walter R. and Annie Laurie Barnette Woody. The Woody/Long house is one of several in Roxboro designed by Kane.

Well-known Roxboro businessman Ruffin Woody grew up in the home and said Kane was a frequent guest at dinners and other events held there by Woody’s parents. During the 1930s and 1940s, said Woody, his parents often hosted “bird dinners” that featured quail or other avian dishes.

“Mr. Kane was always in the group,” he said.

The dining room in the home Woody grew up in features a hidden button in the floor under the table that rings a bell in the kitchen. It was used to summon the butler during the many dinners held there. Woody said the button no longer works but would probably be an easy fix.

He said, “someone pulled the pin” that activates the button, “probably to keep kids from playing with it.” With a smile, he admitted to being guilty, as a child, of misusing the button for his own amusement. 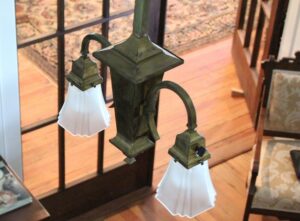 This brass light fixture is one of several unique and original fixtures in the Curtis E. Long Memorial House, originally owned by the Walter R. Woody family, which houses the Escape Room and several exhibits on the Person County Museum of History campus.

The staircase in this house, like the one in the Kitchin house, is unique. It boasts a wider tread and less rise than most staircases, making it easier to ascend and descend. Woody said Rose & Rose Architects of Durham rendered the plans for the staircase.

The attention to detail in this structure continues with cedar-lined closets. Many of the closets are completely trimmed out inside and include a light that comes on automatically when the door is opened. Woody joked that it was hard to believe his father, who was quite frugal, would have splurged on such luxury. 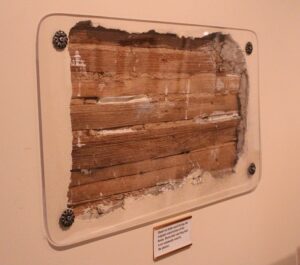 One of the main structures on the Person County Museum of History campus is the former Male Academy, built in 1842 and listed on the National Register of Historic Homes. Upstairs, a cut-out displaying wall construction of hand-cut laths and hog and horse hair plaster gives visitors a view of construction materials and practices of the time.

The wide front porch on the former Woody home features original terra cotta tile. Woody said, as a boy, he knew it only as “red tile.” He vividly remembers, however, that his mother and father loved to sit in their rockers on the porch, and watch people walk by on Roxboro’s Main Street. This was when Walter R. Woody Sr. would enjoy a pipe or cigar.

The roof of the house is made of tile as well. Woody said the tiles were completely removed and cleaned a few years ago. The felt underneath the tiles was replaced. He said taking the tiles off and storing them was a meticulous process. The workers had to stack and label each tile in order to be sure it was placed back in the proper spot.

Ruffin and Lib Woody helped to make the donation of the home possible for the museum.

The building offers one of the newest features of the museum campus. In the Escape Room, groups are “imprisoned” and given 60 minutes and a few clues to escape.

The Person County Museum of History campus also includes a completely outfitted medical office used by Doctors William and John Merritt from 1860 to 1944. Walking into this building is like entering a doctor’s office from olden days. Old hospital beds, primitive-looking surgical equipment, and a large collection of apothecary bottles are among the items on display. 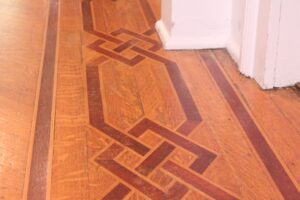 Original oak parquet flooring is on display in the main building of the Person County Museum of History.

One of the smallest structures on the campus is the bell from the HMS Roxborough. On September 10, 1950, the “new” and current Person Memorial Hospital was dedicated to Personians who died during previous wars, and to the “medical mercy” of all people.

According to museum director Young, “As a part of that ceremony, two representatives of the British Consul at Norfolk, Virginia presented to the people of Person County the bell from the destroyer HMS Roxborough, which saw service by the British in World War II.  It was presented as a token of appreciation for the loan of military equipment through the American ‘lend lease’ program to the British in the early part of that war.”

The bell was located in the hospital until the museum opened in 1992. The hospital then donated the bell to the museum.

A stroll around the campus offers something of interest to all ages, and to visitors as well as Person County natives.

Regular hours are Wednesday through Friday, from 10 a.m. until 4 p.m., and Saturday, from 1 to 4 p.m. Appointments are available on Tuesdays. Admission is free, but donations are appreciated. The Museum is located at 309 North Main Street in Roxboro. Telephone: 336-597-2884. Email: pcmuseum@roxboro.net. Web site: www.pcmuseumnc.com.