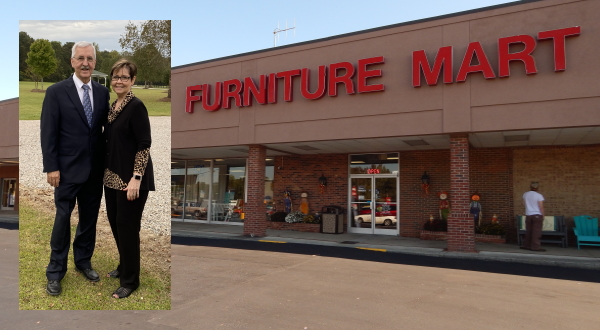 ROXBORO, NC- Family, the American flag, the Fourth of July, and Santa Claus: these are the things that make Furniture Mart owner Larry Cole happy.

And, he tries to share his joy with the community. He, his family and the business are deeply intertwined with Roxboro and Person County history as well, leading to more than a few good stories.

Larry said he started his retail career at age 10 when he worked at Adair’s Drug Store in Cavel Village, next to the Collins & Aikman plant that was a Person County staple for so many years.

Throughout high school, he worked at Byrd’s Food Center in Roxboro. He credits those early jobs with helping him develop a strong work ethic.

The Furniture Mart has been a staple in Roxboro and Person County for 46 years, when it first opened across the street from its present location at 740 North Madison Blvd. Larry said a lot of folks would remember the old Johnson Cotton Company or Johnson Stores being in that location.

The business eventually became Homeway Furniture, and Larry worked there as a store manager until Homeway closed in 1975. Larry and his brother James then partnered to open and operate Furniture Mart.

In 2005, Larry said, the store moved to its current location, where TG&Y — “Turtles, Girdles and YoYos” — was once located. Heilig Meyers occupied the space for a while before vacating and leaving it empty for six years prior to Larry moving the Furniture Mart into it. Shortly afterward, he and his family opened the America’s Mattress store across the road, in the old Furniture Mart location. They now own and operate America’s Mattress in South Boston, Va. as well.

In his long career as a small business owner, Larry has enjoyed being involved in the community in various ways. For years, he has been involved in and led the Roxboro Area Merchants Association (RAMA) and has quite a few tales to tell, including one that involved plans to drop ping pong balls from a helicopter into the Person Plaza parking lot.

He admits this plan sounds a bit like an episode of the 1970s sitcom WKRP in Cincinnati, in which frozen turkeys were dropped for a Thanksgiving promotion. RAMA had to change its plans when the helicopter couldn’t make it, though. So, a bucket truck became the tool.

Larry said what was then CP&L — now Duke Energy — provided the bucket truck from which the ping pong balls were dropped. He said people were running around the parking lot, looking under cars, trying to find the balls, which were marked with numbers corresponding to local businesses offering deals. 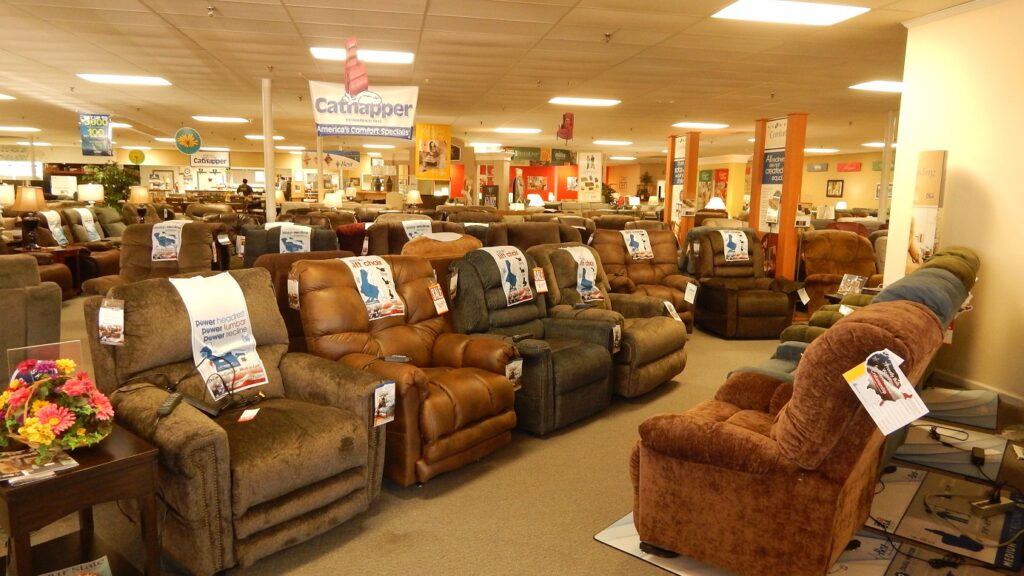 Larry said he once convinced the Roxboro parade committee to have the Christmas parade begin at Person High School, go down Carver Street, to Main, then to Gordon Street and up Madison Blvd. before returning to the high school. However, that would be the only night-time parade and the only one ever to go down the boulevard.

He said he received a call the following week, informing him that he did not have the authority to block a major thoroughfare. He learned that Madison Blvd. is not solely under the City of Roxboro’s control. So, thereafter, the Christmas parade stayed off the boulevard.

Adding to the Christmas fun for the past 15 or so years has been the Santa House in the Furniture Mart parking lot. Larry said he started thinking that “kids had to go out of town or to a one-day event to see Santa.” So he decided, with the help of RAMA, to provide a house in Roxboro for the jolly old elf. He contacted Piedmont Community College (PCC), and the carpentry classes were happy to pitch in and build the house, which is available for kids to visit from Thanksgiving to Christmas week each year. In 2019, before the pandemic began, Larry said over 1,000 children visited Santa’s House.

The Santa House was a true community collaboration. Larry Warren of Warren’s Towing and Recovery service gets the house from storage each year, brings it to the Furniture Mart parking lot, sets it up, then returns to take it down and “never charges a dime,” Larry said with obvious gratitude in his voice. 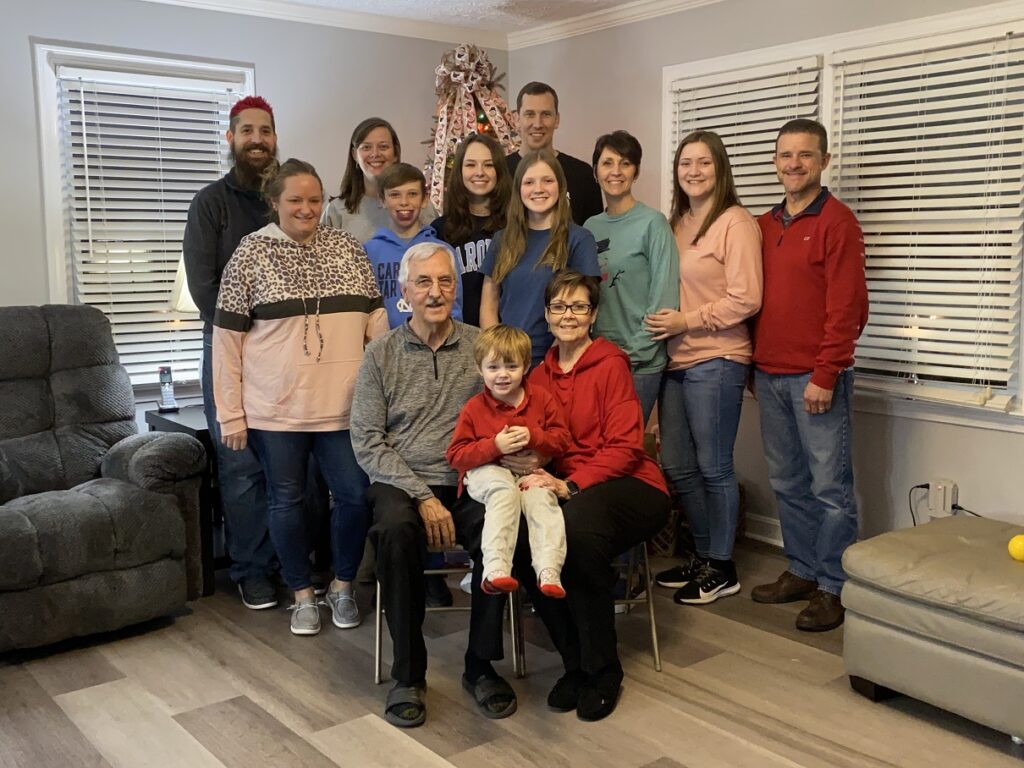 Adding to the holiday cheer, Larry has been instrumental in getting Christmas decorations placed on Madison Blvd. each year as well. At first, Larry said, he helped install the decorations, but said he now prefers to just enjoy them. His son Brian and son-in-law Brad King have taken over the duties of installing the decorations.

About 30 years ago, Larry said, he and WKRX 96.7, Radio Roxboro owner Dave Bradsher began co-hosting a morning radio show. The original intent was for the show to promote Larry’s business while also promoting Roxboro and Person County. Over the years, however, it became a much-loved part of listeners’ Thursday mornings. I have chuckled my way to work many times while listening to their antics.

Dave and Larry play off of each other perfectly and enjoy friendly teasing on the show, which brings listeners a smile or a giggle — especially when Dave tries to convince Larry to wear a white lab coat and call himself the “Doctor of Comfortology.” Even though he sells a lot of La-Z-Boy recliners and other comfy furniture, Larry said he’s told Dave repeatedly that he’s waiting for PCC to offer an honorary doctorate degree before he dons the coat. (He did don one for the photo shoot for this article, though!)

He added that he and Dave always get around to the subject of food on the show, and the good cooks of Person County have been known to surprise them with pies, cakes, apple fritters, and other goodies. He recalls Janie Perkins, who for many years offered good food at the Pizza Hearth north of town, bringing her famous banana pudding. “It was delicious,” he said. The folks at Brooks Farm also gave the guys a strawberry pudding once during strawberry season.

Larry has also been known to cook up some mean baloney burgers for breakfast — just for the fun of it, so folks can drop by, grab a bite, and visit. “People love it,” he told me with a smile.

For over 20 years, Larry has announced races at Orange County Speedway and South Boston Speedway, adding to his broadcasting credits. He said he enjoys working with people like Roxboro City Council member Tim Chandler, who also called the races for many years. 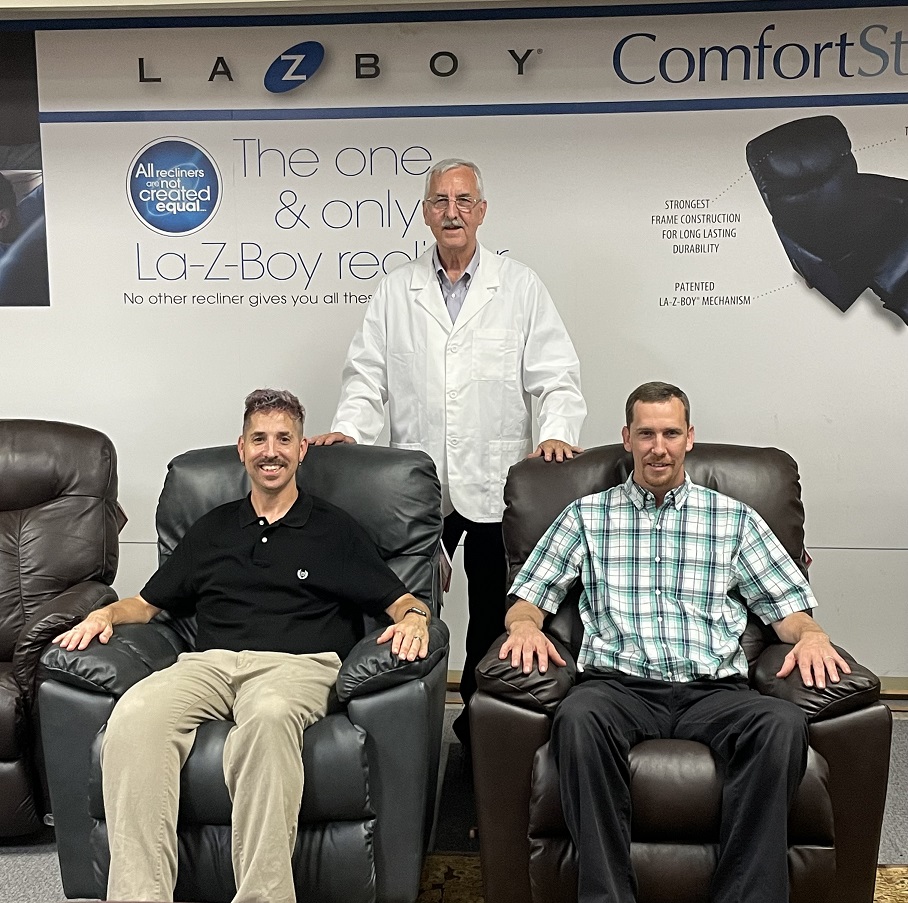 Other accomplishments Larry is proud of include being on the Person Family Medical and Dental Center board of directors for over 30 years. “That is one of the best community services in this county,” he said of the center that offers a variety of affordable, quality health services, including primary care, dental care, nutrition counseling, diabetes education, behavioral health, and outreach services to the community. It is located at 702 North Main Street in Roxboro and also has a dental clinic in Yanceyville.

Larry is also proud of his past service on the Directors Roundtable, which was responsible for initiating the Roxboro July 4th Parade in 1996. He said he still directs that parade each year.

As for his business, Larry said he is proud of the fact that it’s a true family operation. His sons, Adam and Brian, are both vital to the success of Furniture Mart and the two mattress stores. “People never see or hear from my wife,” he told me, “but she is my backbone.” Kathy Cole handles the books for the business. Larry said Kathy also “supports [him] in all aspects of life.”

Both the owner and the store were featured in Furniture Today Magazine in 2008, and that is what led to the opportunity to open the mattress franchises. Larry admits “this boy from Cavel Village” was pretty blown away when he was contacted by the president of Serta and offered an expense-paid trip to Chicago to discuss a new business venture.

Today, Larry is pleased with his success in the mattress and furniture business. He attributes that success to staying abreast of customer needs, offering excellent service, keeping his products affordable, and being an active part of the community. And, striking while the iron is hot as well.

His latest product offering is a prime example of striking at the right moment. When the governor announced that Polywood, the manufacturer of high-end outdoor furniture made from recycled plastic, was locating a manufacturing plant in Person County, Larry said he “found out who [he] needed to talk to and did.”

He said it was “unusual” for a “small, independent dealer” to carry a line like Polywood, and he is grateful to be able to do so. The furniture is his second highest selling line, he said. Keeping his prices the same as those online is a big factor, he explained, plus offering free assembly and free local delivery.

Larry said he regularly gets customers from Raleigh and Charlotte who want to be able to see and try out the furniture in person instead of buying online and not knowing exactly what they’re getting. Furniture Mart has over 40 pieces of Polywood on display and will ship the products anywhere in the United States, he said.

“It has helped our business tremendously,” Larry said of Polywood, adding that he is always happy to build another community partnership.

Overall, he added, “I’ve been very fortunate” in both business and life. His favorite pastime now is spoiling his five grandchildren. “The kids were great,” he said with a smile, “but it is so much fun to spoil the grandkids.” In addition to his family, he said, “I love the flag, I love Santa Claus. Standing with the flag and enjoying Christmas. That’s what it’s all about.”