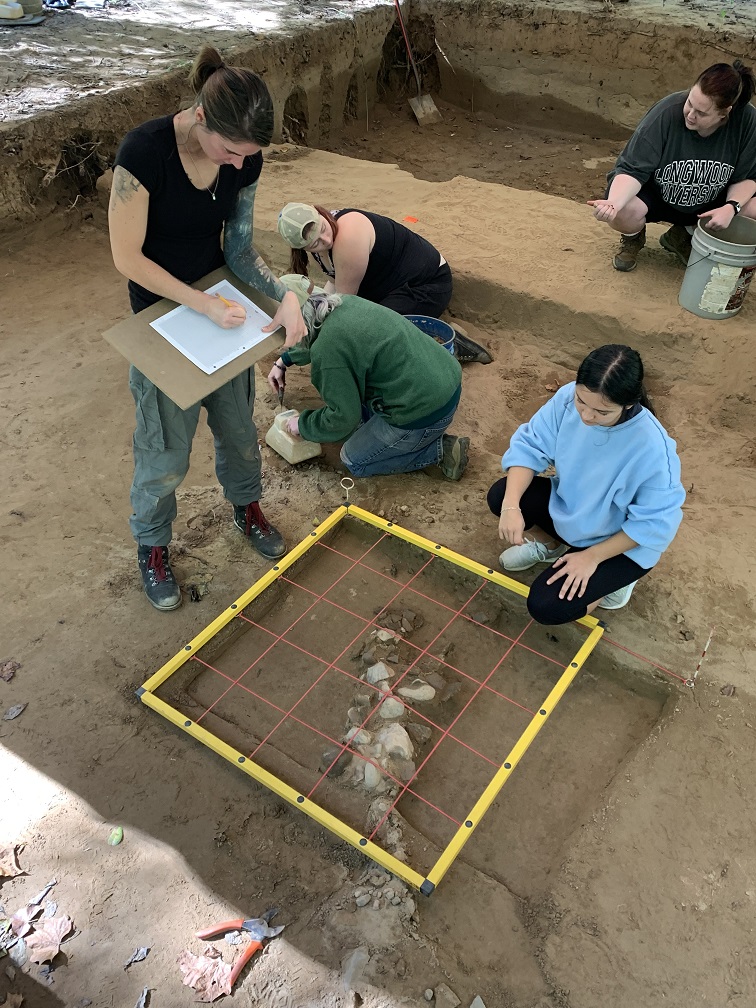 Halifax County native Ward Burton is perhaps best known for the almost-20 years he spent as a driver in NASCAR (National Association for Stock Car Auto Racing). For the past two decades, though, Ward has poured his time and energy into a more stationary and far-reaching project. Since March of 1996, the Ward Burton Wildlife Foundation (WBWF) has served as a conservation organization preserving natural resources in Virginia and other states.

The Ward Burton Wildlife Foundation owns and manages over 10,000 acres of land. This includes some agricultural property as well as 8,400 acres of timberland and diverse wildlife habitat.

Ward told me recently that he and the Foundation, a 501(c)(3) nonprofit entity, have also been working since last spring to discover and preserve a vital part of local history on that land. He said he knew that in the 1860s an archeological dig was performed on property now owned by the WBWF. He didn’t know exactly where that dig took place, but he knew there was evidence of Native Americans using the property as early as the 1600s. From there, Ward said, he wanted to learn and investigate further.

In 2015, he began talking with Dr. Brian Bates of Longwood University in Farmville. That led to Professor Bates and his students doing a Phase I survey of about 25 acres of the property in 2019. That work found some evidence of prehistoric human activity, though not in any large concentrations. Following that, Professor Bates’s colleague, Steve Rann, did a Phase I of other areas of the property from January through April of this year. Ward said this phase was “very rudimentary” and consisted of digging down gently with a spade and sifting the dirt to find out if artifacts were indeed present. He said, “We didn’t want to hurt any of the artifacts, we just wanted to get a story.” Once Ward understood what might constitute evidence of previous human habitation, he took Rann to a spot where Ward thought “there was a good chance of finding” that evidence.

Ward said he named the site the Sanders Dig, in honor of his dear friend, the late C.R. Sanders Jr., who once owned land on which the Foundation is now located. Sanders taught Ward many valuable lessons, including his love for the land and for history. Sanders is buried on the property.

From the initial study, Rann created a grid that marked an area of positive findings that included flints, projectile points, stone flakes, pottery, and other objects. Before Professor Bates came in to do his Phase III study, Ward explained, “we knew we had a six-and-a-half-acre positive site.”

From that knowledge, Professor Bates said he chose an area of about 22 feet by 18 feet to excavate.

Dr. Bates brought in his advanced archaeology students from Longwood and they used small spades, paint brushes, and mesh hardware cloth to collect artifacts dating back to between 900 and 1400 A.D. The actual excavation of the site was a “slow process,” according to the professor. He said he had to teach his students to be patient. The first thing they had to do was dig through the forest root mat. Once that was accomplished, the students carefully dug layers to determine if there were patterns in where they found artifacts. After uncovering artifacts, they removed their findings and took them back to Longwood for further study and dating.

Ward said “all kinds of interesting artifacts” were found by the students, and the most interesting thing proved to be evidence that there had been toolmaking on the site. But the most exciting thing, he said, “is that we are learning about what took place there years ago with Native Americans and what they were doing.” The site has been relatively undisturbed, he said, especially by heavy agricultural and other equipment that would have displaced or destroyed artifacts.

“We are nowhere near putting the puzzle together,” Ward said, “but what we do know is that, with our conservation easement, we have an established site that we can be certain will be protected in perpetuity from heavy equipment or other uses that could damage or disturb this, or possibly other areas not yet found.”

He added that the site was particularly rich because it had not been farmed using modern equipment. “We could see plow zones on the sides but only to six or eight inches,” he said, which means the plows must have been behind a mule and not a tractor that could plow to 18 inches deep. Ward said Dr. Bates told him this was one of only a few sites the professor had seen where there was such little disturbance.

Ward and Dr. Bates said they hope to do more excavations on the site in the future. “This has been such a wonderful experience,” Ward said, “to see the students learn and have the work ethic and to work as a team under Brian’s (Bates) leadership. It is just amazing how far they went as a group to be effective on this project.”

Professor Bates said he had long prided himself on the fact that “nobody in Virginia provides more hands-on learning opportunities than Longwood.”

Ward said he was also happy that a group of school children from Charlotte County were able to visit the site and, under supervision, discover artifacts. Along with the college students, the younger kids “were sifting and cleaning and literally finding artifacts that no human had touched for 500 years,” he said.

He said “there was not a single day that something new wasn’t being discovered. We know there is so much more there. All we’ve done is pick this one little spot,” he said. Professor Bates said he hopes to continue studying the site after the current Longwood semester ends.

“It will be my personal mission,” Ward added, “and I will do whatever I need to do to see that we continue” to learn from the site.

According to ncpedia.org/sappony-indians, “Between 1671 and 1772, the Sappony and Tutelo moved away from the Virginia foothills to avoid Iroquoian enemy attacks. They settled with the Occaneechi on islands at the junction of the Staunton and Dan rivers, near present day Clarksville, Va. This island location allowed the Indians to benefit from trade between the English settlers and other Indian tribes to the west.”

The site goes on to explain that, “In 1607, explorer John Smith asked the Algonquian-speaking Powhatan Indians about their native neighbors to the west. He was told of five villages along the western James River — Monahassanugh, Rassawek, Mowhemencho, Monassukapanough, and Massinacack. The Indians of Monassukapanough later became known as the Sappony.

“The early map of eastern North Carolina and Virginia by John Ogilby features the towns and places visited by the explorer John Lederer, in 1669 and 1670. The map shows the ancestral Sappony towns of Sapona and Nahisan as well as the island town of Akenatzy (Occaneechi). Lederer described the various tribes living in the Piedmont as ‘distinguished into several Nations of Mahoc, Nuntaneuck, Nutaly, Nahyssan, Sapon, Managog, Mangoack, Akenatzy, and Monakin, etc.’

“Though the exact locations of these towns are unknown, Lederer’s travels shown on the Ogilby map confirm that in the early 1670s, the Sappony were still in the Virginia Piedmont, somewhere north of Occaneechi Island.”

“It could be really interesting,” he continued, to learn more about what actually happened. “It is fascinating,” he said, to think about what is being discovered and what may be found next. He mentioned Cactus Hill and other nationally known sites that have “changed all the thought processes about how long humans have been in North America and particularly on the east coast. Is there something that significant here? We don’t know, but it would be exciting if the Foundation is involved” in study leading to better understanding of this period of history.

Professor Bates said he had previously worked with and had a good rapport with the Sappony Tribe, including Chief Otis Martin in Person County, and would be contacting the chief soon to discuss the findings on the Sanders Dig. “We wanted to be sure first,” he said, that the artifacts were indeed those of the Sappony.

“Working with Ward and the Foundation has been fantastic,” said Dr. Bates. He concluded that, in nearly three decades of work in archeology, he had “never had a partner that was more engaged and enthusiastic.”

Look for an upcoming story that focuses solely on the Ward Burton Wildlife Foundation and its work with land and wildlife preservation, the military and veterans, the Army Compatible Use Buffer Program, and the Conservation Police Officers K9 Program.

Phyliss Boatwright is a journalist who for years reported Person County news in The Courier-Times. She has published two books and several short stories. Her book review show, Turn the Page, can be heard on WKRX, 96.7. For the past 11 years, she has taught journalism and served as public information officer at Roxboro Community School. She can be reached via email at phylissboatwright@gmail.com.