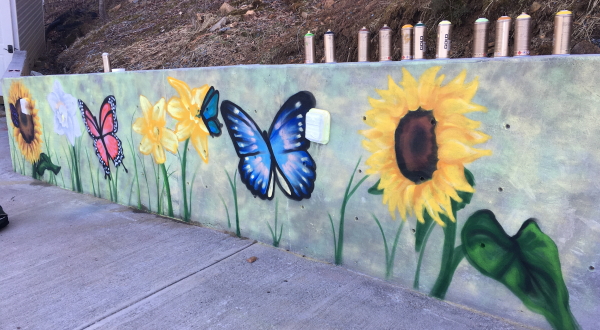 These days there are a number of options for creating retaining walls. The appropriate materials must be chosen for the location and environmental functionality, and the most common of these are wood, stone, brick and concrete. (See our 2019 article, “Making a Cliff,” by Joe Wilkerson, at www.HycoLakeMagazine.com.) Although there are many aesthetic options, it’s not always easy to find one that suits a particular taste.

Due to drainage issues resulting from a steep hillside on their lakefront property, Tim and Amy Oates opted to construct their retaining wall out of concrete, after having tried wood and found it wanting. When they looked at the final product, an 87-foot by four-foot industrial concrete wall, however, it still wasn’t quite their style – practical, sure, but somehow missing something. So, what to do? Why not a mural?

Knowing Tim and Amy’s story makes their choice of a mural understandable. Tim is a Durhamite who started his working life in real estate, switched to law, and now owns a printing company. The latest company project was to print hand sanitizer labels. His creativity seems to come out in his work, both in the variety and the format. It also shows a love of innovation and an appreciation for art and artists.

Amy is originally from Iowa, but has been in North Carolina since she was in high school. Currently an administrator at Duke University, she is an enthusiastic art lover and collector.

Both Tim and Amy like to support local businesses and artists, and they love to water ski, which led them to purchase property on Hyco Lake. Tim has been a regular at the lake since the 1960s so, naturally, he took Amy there for one of their first dates. They purchased their lake home the week before Sept. 11, 2001.

The Oates home is decorated with art by local artists and features the work of one of their daughters, Adrienne. She has created everything from sculptural wall art to an original version of the Durham skyline in watercolor, to beautifully cast and decorated ceramic pieces. Adrienne attended the Durham School of the Arts with Emily Ferrell (www.EmilyFerrellArt.com). Although they were in different programs, the two became and remain good friends. When Mom and Dad mentioned a mural project, Adrienne suggested they approach Emily, because the project was right up her alley. 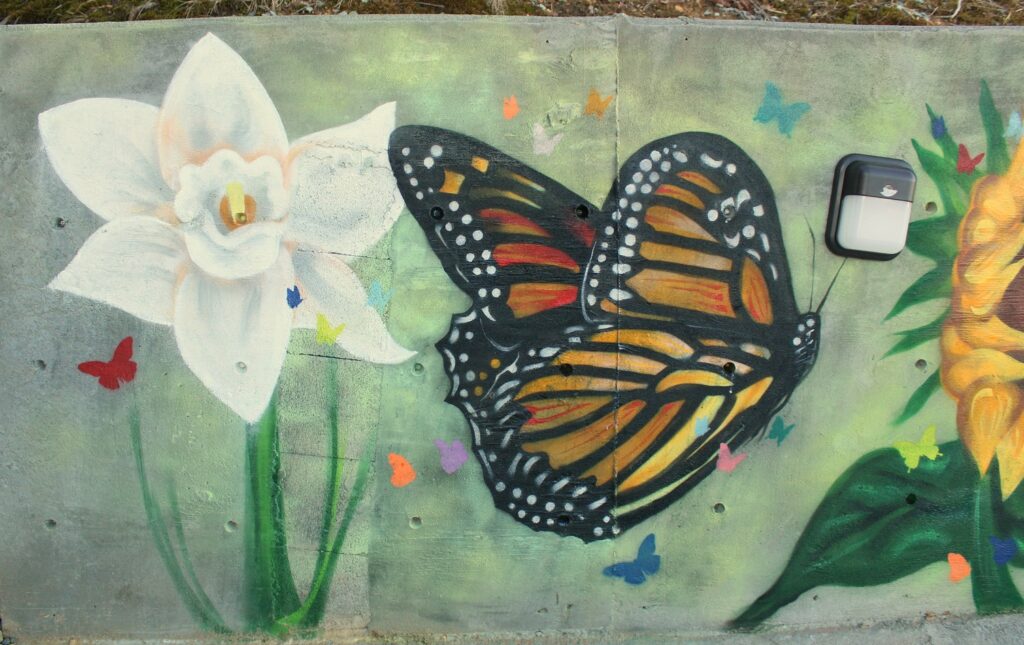 Emily was born and raised in Durham. Her personal history with art goes back to fifth grade, when her art teacher taught her how to use the grid method to create a portrait from a photo. By the time she was in high school, she had developed a love of working with charcoal and graphite to create portraits of people and animals — especially dogs. She likes that graphite and charcoal allow artists to capture the subtle fading and blending that makes for a more realistic and lifelike representation.

Emily’s love of animals initially led her to pursue a career in animal care. After graduating from the Durham School of the Arts, she went to North Carolina State University to pursue a degree in zoology. After a couple of semesters, however, Emily decided to pursue her other love — art — and transferred to the art program at Appalachian State University. When she graduated in 2017, her two loves came together in Emily’s first post-graduation job at a pet resort.

During her final semester at Appalachian, she had an internship with Tommy Lee, an artist and ambassador for local art supply business, Cheap Joe’s Art Stuff, Inc. (www.cheapjoes.com), in Boone, N.C. Cheap Joe’s was founded in 1987 by local pharmacist Joe Miller, who was also an avid and award-winning watercolorist. His son Joseph is the current owner and operator of the business.

The Ambassador Program was created to promote fine arts in communities and to provide artists with the materials they would need to create their art for the public good. Subsequent to her internship, Tommy recommended Emily as an ambassador, a role she has undertaken in several projects throughout the area. I would consider her work at Hyco Lake among those projects. It certainly adds a lot to the scenery at the lake.

In addition to charcoal, Emily discovered spray paint, a new medium that provided some of the same flexibility when it came to the blending and fading that she loves. It can be a difficult medium to control and thus requires some training, so she went to San Francisco to work with an artist there and learn the ins and outs of creating art with spray paint. This knowledge and experience have allowed her to engage with public art on a much larger scale. Typically associated with street art, spray paint seems a natural choice for large scale public projects, such as murals, and elevates it from the realm of simply being used for graffiti or painting lawn furniture every summer.

Given her talent and experience, as well as the family connection with the Oateses, Emily was a natural choice for this project. The fact that the “canvas” was an 87-foot concrete wall made spray paint a natural fit. Plus, the quasi-public location made a graffiti style a good choice. 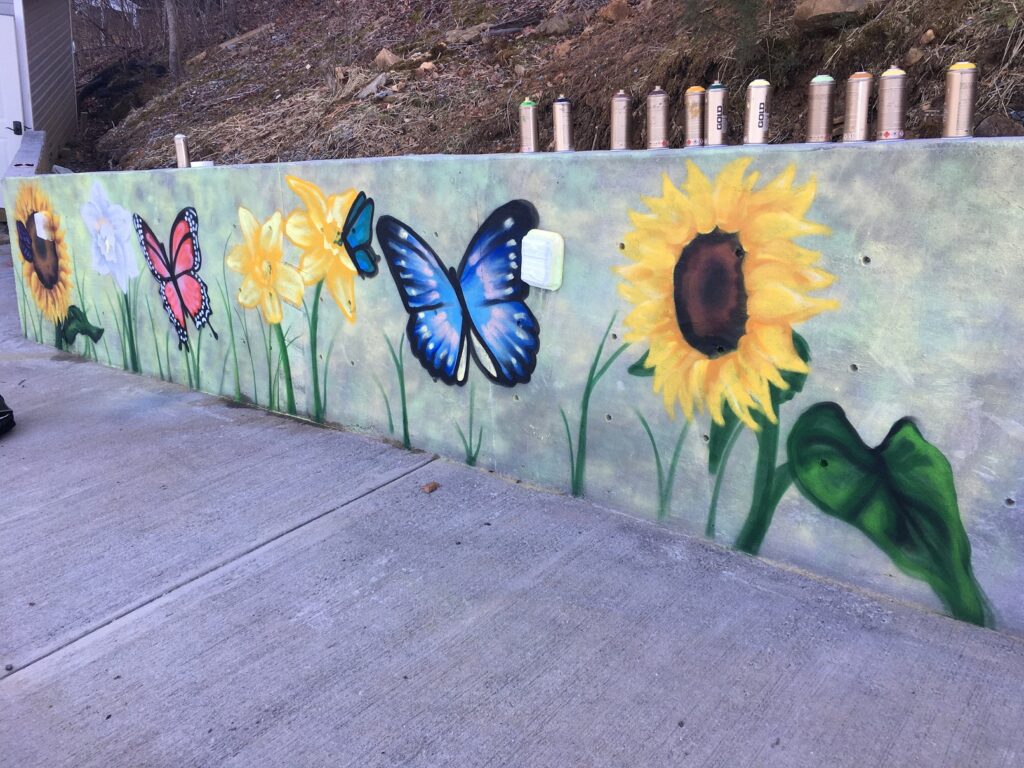 The concrete structure was built by Baker Hardscapes (also known as Howard Baker Concrete: The Hardscapes Solution on Facebook™ and the NextDoor app). It is a family-owned business run by Howard Baker, a licensed contractor in Caswell County. Howard says he has been doing more and more work on Hyco Lake properties recently.

Located in Yanceyville, the Bakers have been providing services in the area for 40 years. After working on the Oates wall for two and a half weeks, the Bakers had the final version of the industrial, concrete wall in place in late January.

Emily began work in early February. Tim and Amy already had a good idea of what they wanted. Amy loves butterflies, hummingbirds and sunflowers because these are elements in her life that make her happy. Tim’s mother loved daffodils. Emily met with the Oateses to view and photograph the site.

Next, she created sketches to scale with color and then started work on the wall itself. The background is spray painted using yellows and grays to provide some depth while not detracting from the butterfly, bird and flower motifs she later added with spray paint. This was a process of layering using the spray can close up to create crisper lines, and moving farther away to create shading and blending effects.

The artist created stencils to use for the smaller butterflies that drift through the mural, adding more color. Finer details were created using acrylic paints. After the artwork was complete, the entire length of the wall was sealed with a polycrylic fixative, a combination of clear gloss and varnish. When she was finished, Emily added her street tag — the graffiti version of her signature. She worked on it for nearly 200 hours, putting in five hours per day, three to four days a week.

Of course, there were some challenges along the way. As with any outdoor art, the weather was a factor. Rain and paint of any kind generally do not mix. Wind can take spray paint in unwanted directions. The amount of light affects the perception of color tones and shading. Temperature affects how paint adheres to a surface. Furthermore, this wall is on a steep incline, and is only four feet tall, requiring the artist to kneel or sit for much of the work.

The finished product revealed Emily’s mastery of her craft and delighted Tim and Amy, though. Since its completion, the wall has begun attracting attention on the lake. Boaters regularly pause to look at and/or take photographs of the site; a source of pleasure for both Emily and the Oateses. I am grateful to Tim, Amy and Emily for opening my eyes to more landscaping possibilities as well as the depth and breadth of art in the 21st Century. Spray paint –who knew? 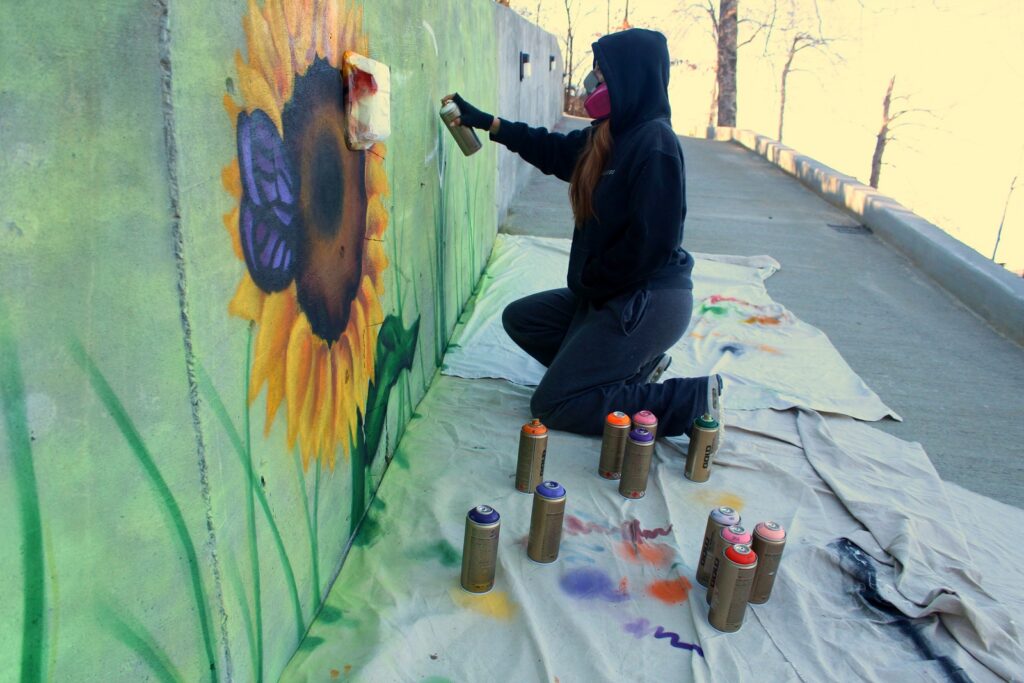 Settled In At Hyco Lake

Tim and Amy are more or less settled at Hyco now, having adapted to working from home during the Covid-19 situation. They have many opportunities to enjoy water skiing, Emily’s work, and lots of butterflies and hummingbirds.

Emily has a day job at a dog day care center, and has also been chosen as the August “Artist of the Month” for Five Points in Raleigh. For this project, she will create a mural in Five Points, thus continuing her ambassador role and bringing her art to another community.

It has been said, ‘when life gives you lemons, make lemonade.’ Well, the next time you are up against a wall, think art!