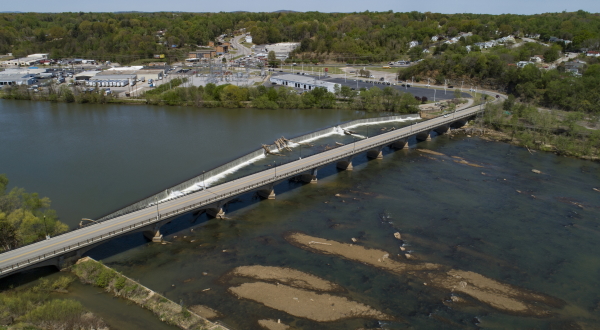 Story and photos by Paul Liggitt

Everyone needs water to survive, and for a city to grow and prosper it needs access to water. In fact, 14 of the largest cities in the world are only a few dozen miles from an ocean, and rivers are just as important for the success of a community. Only recently have cities without proximity to rivers or oceans been able to survive and grow because of more efficient means to transport needed resources. Railroads alone transformed many unsustainable towns into bustling cities. Suffice it to say that flowing water fosters and sustains life, and bridges provide access to that life.

Since the 1500s, Native Americans and Europeans have inhabited the banks of what was to be known as the Dan River. In 1753, Col. William Wynne, a land surveyor, established a settlement on the banks of the Dan River which became known as Wynne’s Falls. It will take some serious archaeological sleuthing to pinpoint where the falls were located, but from those beginnings the Dan River became one of the sustaining resources for Danville. All of this brief history brings me to the obvious conclusion that where there is a river there are bridges, and where there are bridges there is access. Populations that could build bridges, although not completely immune from collapse, were less likely to fail and they knew their bridges gave them access to more of everything.

It’s helpful to reflect on the history of the region in order to understand the importance and significance of its bridges.

In 1728, William Byrd II, a wealthy Virginia lawyer and holder of some 20,000 acres on the yet-to-be surveyed North Carolina-Virginia border, gave the Dan River its name. In 1746, Wynne, who had settled on the Dan, developed a ferry for commerce and passengers to cross the river; so, we could call the ferry a floating bridge for those that could not cross in the shallows with their wagons or on foot.

Wynne’s Falls continued to grow and was eventually established as the town of Danville in 1793. Danville became known as a warehousing destination for tobacco, and cities all along the river system in Virginia were growing. While rivers are often used as state geographic boundaries, the Dan would have none of that. It crosses the North Carolina state line eight times as it flows from the eastern side of the Blue Ridge Mountains on its way to empty into a branch of the Albemarle Sound.

In 1801, the wooden Main Street Bridge – now known as MLK Bridge – was built and opened for wagon and foot traffic. It was also known as the “free bridge,” which leads me to think that there was at least one bridge in Danville that was a toll bridge. Rivers and canals were already being used to facilitate commerce in North Carolina so in the early 1800s the Roanoke Navigation Company was chartered to manage and improve Virginia rivers for trade. It created a canal to bypass the Great Falls and established other canals along that state’s river system to clear the way for river commerce.

In 1816, the navigation company built the Union Street Dam which bisects the river, arches upstream, and measures 10 feet high. The original dam was made with timbers and rocks but has now been replaced with granite blocks. The Roanoke Navigation Company also saw fit to create a canal on the south side of the river to bypass, most likely, Wynne’s Falls located downstream from the Union Street Dam. Consequently, it allowed flat-bottom, shallow-draft boats called bateaux to safely carry their two to 10 tons of cargo downstream. It also provided access to the business district and tobacco warehouses in Danville.

The bridge-building timeline continues to 1878 when the Union Company’s Bridge was chartered and Danville’s second covered wooden bridge for foot and wagon traffic was completed in 1879, extending Union Street across the Dan.

The mills of Danville were making their mark on the fabric of the textile market, along with the tobacco trade. Danville was home to Monotock Mills, Riverside Mill, George Yarbrough’s flour and grist mill, and of course Dan River Fabrics. All of these mills were able to harness the power of the Dan for hydroelectric power from the mill races, canals, dams, and power pumping stations. The original canal created by the Union Street Dam powered the iconic Mill No. 8 (better known as the “White Mill”) on the southern bank of the Dan.

Times, however, were changing and although the textile and tobacco industries were still going strong, the once bustling commerce on the river system was slowly being replaced by railroads. The rivers were the superhighways of the past, and the bateaux and steamboats were the single and tandem trucks that moved the merchandise from farmers and tradesmen to the market. By 1881, though, the advent of the Richmond and Danville Railroad had caused the collapse of the Roanoke Navigation System.

The good news is that the Dan River is still flowing, and the bridges are still there connecting north and south as they provide access to tradesmen, professionals, and consumers of all kinds. The tobacco warehouses are being repurposed for different uses, and by 2023, the now-vacant White Mill is on track to be redeveloped into a multi-use space where it overlooks a canal built more than 200 years earlier. The Riverwalk Trail on both sides of the Dan is also worthy of time and energy. It lifts the spirits as it increases the heart rate of those who walk or bike it.

There are over 21,000 bridges in Virginia, all with their own history, and Union Street is but one. Visitors to the small park on the Riverwalk trail, north of the Union Street Bridge, can sit, reflect, and appreciate those who have gone before to afford us the pleasures of today. Those bridge builders of the past were willing to risk granting access to other cultures and personalities while increasing their own access, even though there were risks to new relationships. God bless the bridge builders. Water provides sustainability for a community, but bridges provide access to the culture.

A gracious thank you to historian Gary Grant for his many fact-filled emails with attachments that helped this history novice stay within the factual boundaries of this article. Thank you.

Not only can Paul write, but he is a professional commercial photographer and video producer. He likes to say he has spent many years working on his overnight success. As an FAA certified drone pilot, aerial video and stills are also services he provides. Paul Liggitt Photo & Video, (336) 322-1167, www.PLphoto.com