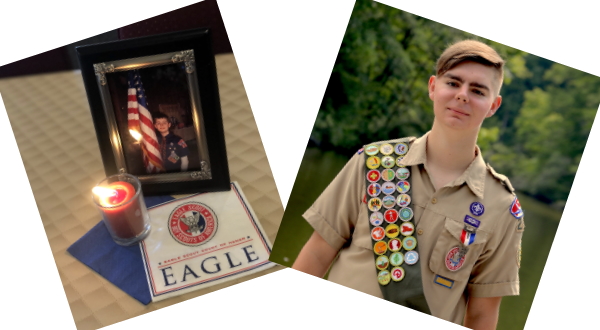 PERSON COUNTY, NC- Person High School senior Noah Paith was just seven-years-old when his parents took him to his first Cub Scout meeting, and Troop 239 quickly became his second home. Four years later, at the age of 11, Paith officially became a Boy Scout. Now, nearly seven years after that, he has achieved Eagle Scout status. “I’m grateful my parents put me in scouts,” Paith said, “it has given me many excellent opportunities and even more great memories.”

Some of his greatest memories were made during a trip his troop took out west during the summer of 2018. They traveled to 19 states across the country, over the course of two and a half weeks, camping the entire time and exploring various national parks. This trip gave him the opportunity to see Mount Rushmore, the Grand Canyon, and Yellowstone, Zion, and Bryce Canyon National Parks, as well as Devils Tower. “It was a once in a lifetime trip, and by far my favorite memory while in scouts,” Paith said.

The best part of scouting, according to Paith, is going on campouts. He believes these trips allow the scouts to have a great time while simultaneously learning to master different skills. In addition to campouts, he enjoys scouting trips that involve backpacking. His troop often backpacks around Mount Rogers, Va., which is where he realized he loved the hobby so much. “After my first trip, I couldn’t stop thinking about the beautiful scenery,” he said, “I also really enjoyed campouts at Cherokee Scouting Reservation, as those trips allowed me to do rank advancements towards Eagle and work on additional merit badges.” 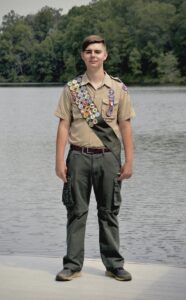 While Paith has been able to take part in many adventures, he has also enjoyed earning an impressive 29 merit badges. His favorites are the paddle boarding badge and the badge for first aid. Living at Hyco Lake made paddle boarding easy and fun to learn. Paith said he really enjoyed how “calming” it was. While first aid may have been a bit more difficult, Paith said it was “fascinating to learn the proper ways to treat certain injuries.” Plus, exploring this badge “helped me realize which career I want to pursue after high school,” he concluded.

This realization went on to further help him decide what he wanted to do for his Eagle Scout Project. After discovering his new passion, and having several talks with his scout master, Tony Bowes, Paith decided that hosting a blood drive would be perfect for him. Not only was it something he was interested in, but it also seemed like the perfect way for him to give back, as there is a great need for donors throughout the country. 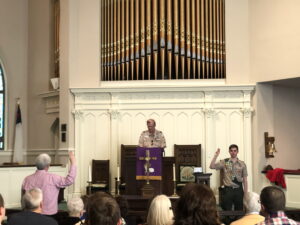 Paith went on to host a successful blood drive at Long Memorial United Methodist Church in Roxboro on Aug. 10, 2019. “The key for success with this project was promoting the event, and making people understand the importance of the cause,” he said. In the weeks prior to the drive, he went to many local businesses and hung fliers to get the word out. His effort and dedication paid off in the end. He helped collect 26 units of blood, which caused all supplies to run out. “For me, choosing and completing this project meant that I was able to help multiple different people across the nation,” he said, which is a rewarding feeling. “Working with Red Cross representative Kim Williard, I learned how to organize a large-scale event, as well as the importance of good leadership,” he said, “these are lessons I will value for many years.” 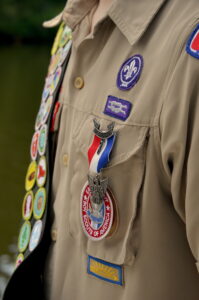 Being an Eagle Scout requires one to have a vast knowledge of numerous tasks and skills, including the ability to be a good leader and teacher, which are just a few of the traits all of these young people are expected to exhibit while managing their final projects, as well as within all aspects of their lives, even after scouting has come to an end.

When, at the age of 13, Paith made the decision to become an Eagle Scout, he was behind on requirements compared to other scouts his age. He decided he “needed to start working immediately,” upon realizing how much he would be able to take away from the experience, as well as how much the accomplishment could impact his future. “At first, it was difficult to decide if I really wanted to put that type of time, work, and effort in, but once I started on the path, I never looked back,” he said. 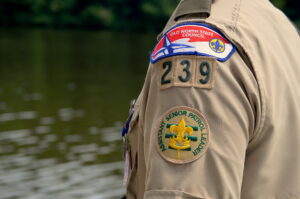 Now, he can confidently say that he “wouldn’t change anything” he did on his path towards the honor. “It feels great to officially be an Eagle Scout,” Paith said. “It’s an accomplishment I have been working hard to achieve for many years.” He concluded, “I love finally being able to say that I have received the rank.”

In the future, Paith plans to pursue a degree in biomedical engineering at North Carolina State University. He says he is grateful for all that scouting has given him thus far, and is excited to see the ways in which this journey will go on to impact his next adventure.

Sara Coates is a graduate of Roxboro Community School, where she developed a deep love for journalism. She is currently studying social work with plans to someday work within our foster care system. Sara loves spending her free time working at Small World Daycare in Timberlake and writing for Hyco Lake Magazine.