Jonesing for a Restoration 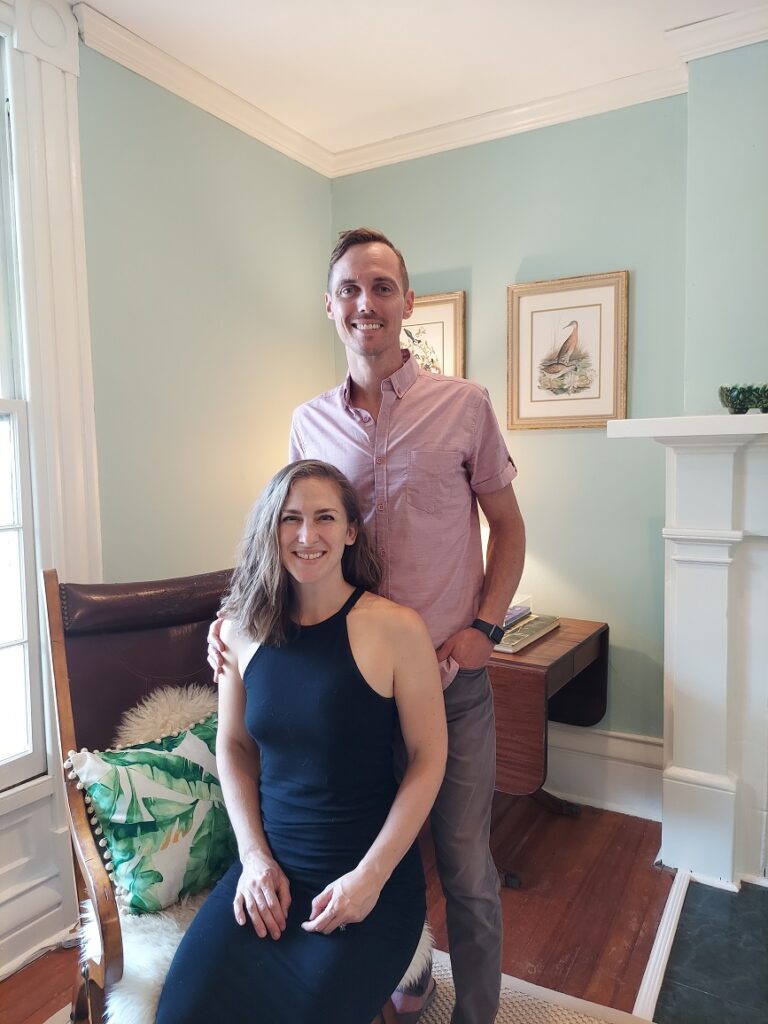 Jake and Nancy Keeler - Owners of the Jones House in historic Milton, NC

Generally speaking, buying and restoring a forlorn 170-year-old house is a daunting proposition. Participants can count on exhausting, dirty work, unwelcome construction problems, numerous frustrating roadblocks – all resulting in painfully slow progress. This might cause some to avoid such projects or reject them outright – but not Jake and Nancy Keeler. This was just the sort of project they searched out and enthusiastically embraced.

In 2020, in the throes of the Covid-19 pandemic, the couple found themselves frequently traveling from their home in Lancaster, Pa. to Ringgold, Va. while Nancy and her siblings were in the process of renovating their mother’s home as a short-term rental. Meanwhile, the Keelers decided to start looking for an investment project of some kind, either in Pennsylvania or in the historic village of Milton, NC, about a mile from where Nancy grew up. “I didn’t know what exactly that meant, or what that would look like,” Nancy said.  “Jake was really the one that said, ‘let’s do something in Milton.’”

Jake grew up in a small rural town up north, but he had grown fond of Milton over the years. An avid runner, he would find himself passing through Milton on his runs when the couple visited Nancy’s parents. “I just remember coming through Milton, and I felt like there was this uniqueness that, being from the north, you don’t see,” Jake explained. 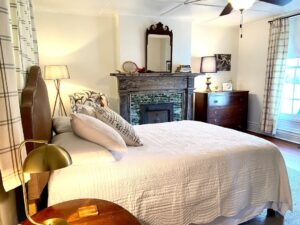 The village, located along the Dan River in Caswell County, NC was incorporated in 1796 and is often referred to as a “museum without walls,” because the entire town is designated as a historic district. Prior to the Civil War, Milton was growing exponentially -- not unlike other towns such as Danville, Va. – as the tobacco industry fueled a booming pre-war economy. By the mid-1800s, wealthy merchants’ grand homes and imposing brick warehouses towered above the tree-shaded streets but today, only a handful of original homes and buildings are left as reminders of the town’s grand and storied past.

Jake and Nancy began searching for the right opportunity, and eventually settled on purchasing and renovating a prominent Victorian style home on Broad Street known locally as the “Jones House,” which had been listed on Preservation North Carolina’s website awaiting a buyer for some time. The Greek Revival house was built in the 1850s with additional “Victorian flourishes” added in the 1890s. Some of the fireplace mantles, door and window casings, baseboards, and crown molding in the front rooms are believed to be the work of Thomas Day, famed craftsman of the 1850s whose home and shop, now a museum, is located just a few doors down from the Jones House. 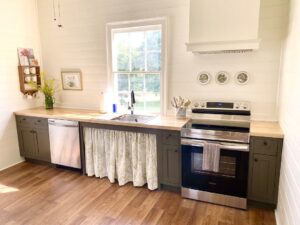 When the couple closed on the house in March 2021, it was a total disaster. Years of neglect and abandonment resulted in gaping holes in the roof and walls, allowing rainwater to flow in, steadily eroding the structural integrity of the home.  “It was really bad,” said Jake. “I remember when I demoed, this moment of pulling up a piece of plywood in the kitchen and just seeing sunlight outside, and a hole I could have fallen through.” Birds and squirrels regularly entered the home through such holes, setting off the motion sensor alarm which summoned local law enforcement. Undeterred, Nancy began assembling a team of contractors and tradesmen, and set about planning the mammoth renovation project with the ambitious goal of being completed by the end of summer 2021. This was not the Keelers’ first venture in historic home renovation, and Nancy relied on previous experience renovating an 1890s apartment building she and Jake own, as well as knowledge gained from her career in community and economic development – specifically, the pre-development and construction of two large commercial spaces in Lancaster.

The Jones House required drastic renovation not just to repair the obvious damage, but careful historic restoration with oversight from Preservation North Carolina to ensure that the home was returned to a state as historically accurate as possible. 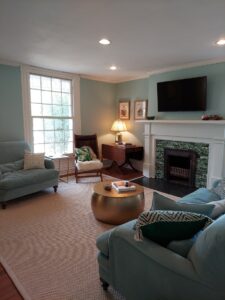 “It’s actually kind of frustrating that people are going to come through this house and not realize that it has been totally renovated, because all they’re going to see is original woodwork moldings and just think it’s always looked like this when, in actuality, so much of it had to be carefully put back together,” Nancy said.

Nancy and Jake tackled several projects themselves on their frequent trips down from Pennsylvania, such as tiling bathrooms, re-glazing the original windows, and much of the demo work. Despite their hands-on, do-it-yourself capability, Nancy insists that she mainly functioned as official Project Manager – keeping everything on schedule, the site organized, and building materials in constant supply. 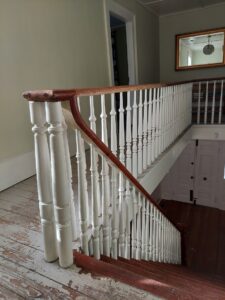 “I would spend hours talking to people, going over and over the project and making sure the pieces were all lined up,” she recalled. Drawings of the renovation plans were submitted to state preservation officials, with photos and descriptions of every change that needed to be made. Every detail had to be approved – from the color of the mortar used to re-point the chimneys, to every single piece of woodwork that was changed or moved.

While the house is not unlike other home restorations in Caswell County, for Nancy and Jake the project was about more than just simply restoring a building – it was about bringing a positive change to the community where she grew up. “My motivation has always been community and economic development for Milton. This is where I grew up,” Nancy said. “I work in community development and the whole reason I do the work that I do now is because I grew up here and I saw a lack of opportunity.”

While the couple had long admired Milton’s architectural charm and wanted to contribute to community development efforts, the Jones House project brought them the unexpected joys of a more intimate pace of life in such a small town. They speak fondly of Zooming into Town Hall meetings, getting to know the local shop and restaurant owners, meeting volunteer firemen, having work done on their vehicle at the local auto garage, and the warm support of the locals. 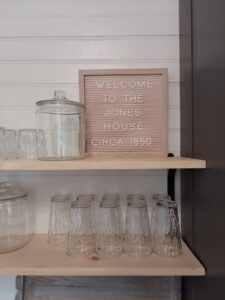 “People here have the time and space to talk, to visit, and things like that, so I’ve really been enjoying connecting with people locally, hearing their stories – and not just that connection to my own personal past, but also the past of the community. And that’s been really nice,” Nancy said fondly. “I could not have done this without the support of the community. There is no way I could have taken on this project without people genuinely supporting me and jumping in and helping. I could not have done this anywhere else. That has been incredible, and I just love that everyone in Milton has been really encouraging, and it’s been really fun to know that so many people are rooting for this to succeed.”

The Keelers’ agreement with Preservation North Carolina requires them to own the home for a period of five years, after which they will likely put the house on the market as a single-family home. Currently, when the Keelers or their extended family are not visiting, the home is available as a short-term rental on Airbnb. Upon completion of the recent renovations, right on schedule in September 2021, the house has five bedrooms, two full baths, one half bath, dining room, sitting room, and all new kitchen, and has been comfortably outfitted and decorated in a chic Grandmillennial style. Its proximity to Hyco Lake, as well as being only minutes from Virginia International Raceway make the Jones House an ideal place for racing groups or families vacationing in the area.

When asked if this was it for them or if they were going to tackle any more “projects,” both Nancy and Jake agreed – despite the difficulties of the Jones House project, they will be tackling more projects in the future – whether in Milton or at home in Pennsylvania. What those projects look like, they don’t know; but one thing is certain – they have the determination and grit to see any job through, and a big heart for the community. 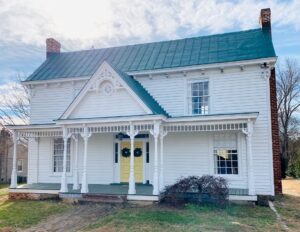 Hosanna Blanchard is a native of Milton, NC. She currently serves on the board of the Thomas Day House/Union Tavern and is the owner of the Carolina Vintage Co. in Milton’s historic “Commercial Row.”  She works for the Person County Tourism Development Authority, and currently lives not far from Milton on a farm with her husband Kevin and an assortment of horses and pets. Find a Dragonfly at the Plant Sale 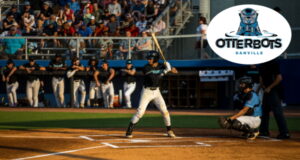 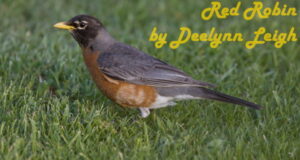 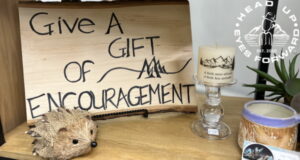 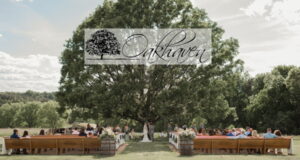 A Family Haven for Almost 100 Years 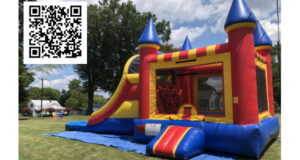 Bouncing into Another Year of Success