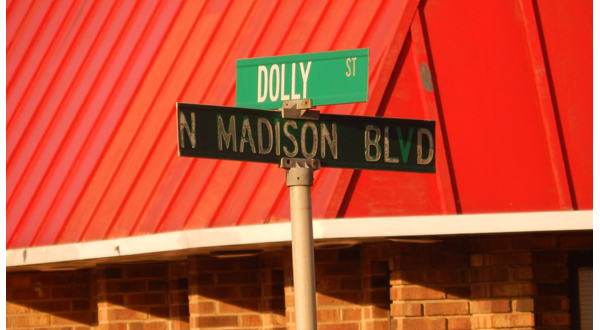 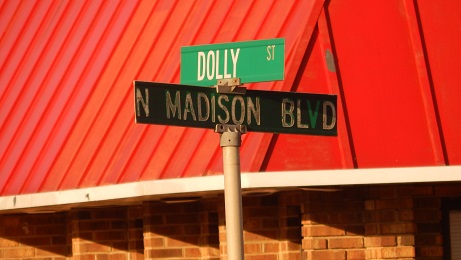 Whether you call her Dolley, Dolly, Dorothea, or Dorothy, whether you believe she was born at Paine’s Tavern, Payne’s Tavern, or New Garden, Dolley Payne Todd Madison has been part of the lore of Person County for many years.  In the past there was a Dolly Madison Theater on Main Street, Dolly Street (in two locations), a Dolly Madison Motel on, of all places, Madison Boulevard.  There probably have been other places bearing this name in the county as well that have faded from memory and failed to be recorded.

If you remember your high school American history lessons, you know that Dolley Payne Todd Madison was the wife of the 4th President of the United States, James Madison.  During the War of 1812, Dolley endeared herself to generations of Americans by saving items from the White House, including the famous portrait of George Washington, and then fleeing right before the British burned the White House. Even after the death of President Madison, she retained her popularity and respect in Washington society and political circles.

As a child growing up, I always knew that Payne’s Tavern was the birthplace of Dolly Madison.  I may have even been taught that in school.  Many people of Person County disputed Guilford County’s claim as being the birthplace of the popular First Lady.  (She may have very well been the first President’s wife to be referred to as the First Lady). In an article appearing in the February 9, 1927, edition of the Roxboro Courier, the author points out that in the Hall of History in Raleigh a card under the portrait of Dolly Madison states she was born in Person County.  This was proof enough, and Person County came to claim to be her birthplace.  More exactly, Payne’s Tavern.  Articles appearing in The State, now Our State, magazine further ingrained the idea that indeed Dolly had been born here.  Never mind the fact that all early records spell her name as Dolley.   In 1949 a well-known teacher of the county for many years sent a letter to Mrs. Eleanor Roosevelt inviting her to be the speaker for Roxboro High School’s graduation.  In her letter, she offers a history of Person County and “Things of Interest.”  This letter appeared in the May 21, 1949, edition of The State. In this article Payne has become Paine and relatives of Dolly’s parents who owned and operated the tavern.  The family was on their way from Philadelphia back to New Garden in Guilford County.  Another article appearing in the June 1, 1965, edition of The State noting that there is a Dolly Madison Motel in Roxboro reiterated the claim Person County had staked as Dolly’s birthplace. 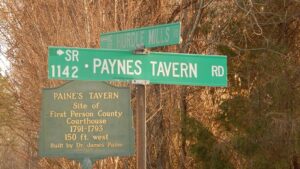 The supposed birthplace in Person County was at Payne’s Tavern.  A question arises here: “why are there two spellings of Payne.  Records show that a Dr. James Paine moved to the area of Person County in 1767 and owned over 4,000 acres of land and is said to have built the first brick house in what would become Person County.  This was in the area of the stagecoach route and according to some, Dr. Paine opened a house of entertainment or tavern.  There was also an area where travelers could camp.  Supposedly, General Cornwallis and his men camped there for the night after receiving provision from a British supporter in what is now known as Roseville.  Early records show Dr. Paine’s name with the letter “i”, and other early records show Dolley’s father’s name as John Payne.  If you are in the area the historical marker spells Paine’s Tavern but the state sign almost directly across the road spells it Payne’s Tavern. Did the spelling change to further the lore of Dolly’s birthplace?  Records do show that Paine’s Tavern did serve as the first courthouse for the newly formed county of Person until a new structure was built in 1793 a bit north in Moccasin Gap, now known as Roxboro.

Records from the Quaker settlement of New Garden in Guilford County indicate that John Payne and his wife moved their family there in 1766 from Virginia.  The settlement had been established there in the early 1750’s.  On May 20, 1768, Dolley their 4th child was born.  It would seem strange that the family would be traveling with 3 children and another’s birth imminent, especially in those times of very rough travel conditions. Add in the fact, that Dr. Paine had only been in the area for a short while, and it seems to be highly unlikely Dolly was born here. So why has the story persisted and places have carried her name here in the county?

On Thursday, April 9, 1936, the Kirby brothers, C.B. and Teague, opened their third movie theater in Roxboro.  This theater was located on Main Street just down the street from the Palace which sat across from the current courthouse. The Dolly Madison was across the street from the future Kirby. The Kirby’s sponsored a contest to name the new theater.  The winning entry was submitted by a Mrs. L. M. Carlton.  Her entry: The Dolly Madison.  Interesting.

Later in the 1960’s the Dolly Madison Motel and the Dolly Madison apartments opened on Dolly Street which is off of Madison Boulevard.  Anyone who has more information about these two please share.  I only remember eating in the restaurant at said motel.  But think it would be very interesting to know who named it and why that name was chosen.  Maybe just more of the lore?

Finally, there is the main thoroughfare through Roxboro: Madison Boulevard.  Not Dolly Boulevard but Madison.  My attempts to find who named this and who it was named for have been fruitless.  May be the right person who knows these answers will read this and share.  The teacher mentioned earlier does say in her 1949 letter that Madison Boulevard was newly opened.

So was she or wasn’t she? Does it really matter now?  Evidently in the past, it mattered quite a bit to at least a few people. It does raise some interesting questions regarding the two spellings of Paine/Payne and the two spellings of Dolley/Dolly, and the naming of a motel and a main highway?  Anyone with these answers please share on the magazine’s new website (HycoLakeMagazine.com).  Sometimes these little trips into the past offer us a nice diversion from our current world, and might just offer us a bit more about who we are.

Norwood Walker has written dozens of interesting stories about our community for Hyco Lake Magazine. Please send him an email if you have ideas or comments, NorwoodWalker@HycoLakeMagazine.com.