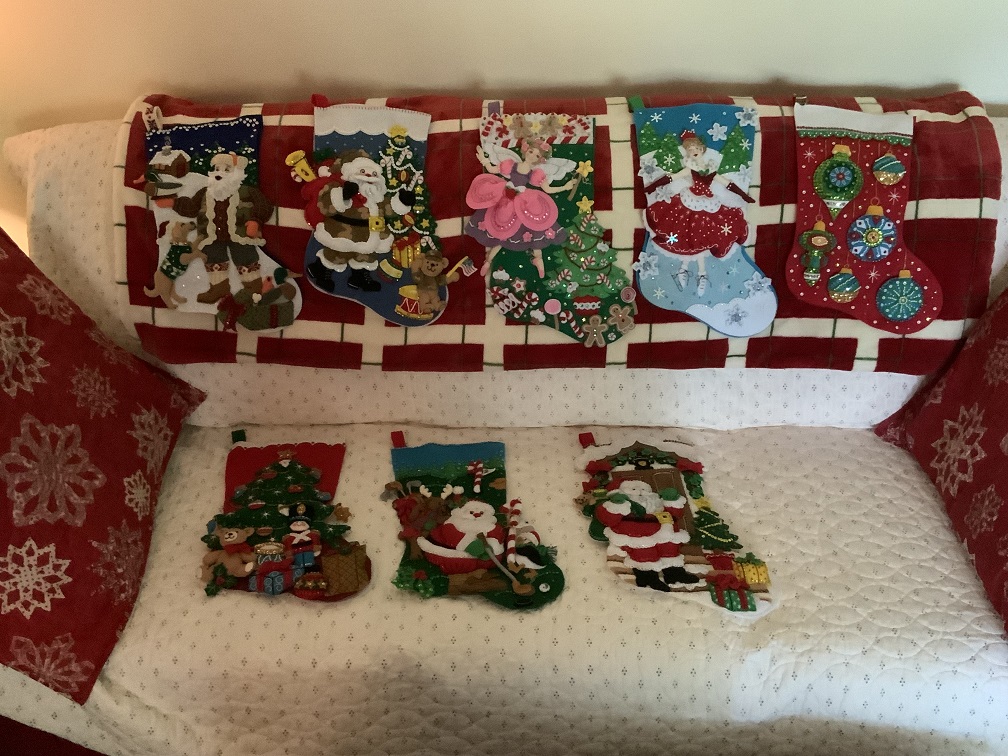 “The stockings were hung by the chimney with care.” You can bet good money that these stockings better be hung with care and stored that way, too.

Not everything was bad about the isolation of 2020. I can tell you I know of at least nine good things that came out of it.

Even at a younger age, my wife Merlette enjoyed craft projects involving sewing, sequins, beads, and other shiny things. She had crafted Christmas tree ornaments, Christmas stockings, and even a large jewel-embellished tree skirt. Some of the ornaments remain, but a beagle pup named Lucy “took care” of the tree skirt. When Covid began to rage in the spring of 2020 and she found herself with some extra time, Merlette decided it was time to pick up the sequins and thread again and begin a family Christmas stocking project.

After retiring from her second career as a medical office systems instructor at Piedmont Community College (PCC) in May 2020, this became the primary consumer of her time, along with countless trips to craft stores such as Michael’s to supplement what the mail order kits may have left out or to look for additional embellishments in her plan for each stocking.

Of course, the only granddaughter’s stocking came first, followed closely by the two grandsons. Each design was chosen to reflect a special interest of each child. A ballerina, some camouflage teddy bears, dogs, and drums danced across these first three. After the three grandchildren were taken care of, she started on our two children, then their respective spouses.

Each stocking had some elements reflecting the interests or personality of each individual. Some golf related for the son, some hunting related for the son-in-law, and the same for daughter and daughter-in-law. Christmas 2020 passed, and the stockings were still a work in progress. Mine was number eight, completed early in 2021. Then Merlette began on her own, which quite appropriately is an angel. Yet, it remains unfinished because in mid-2021, a new focus came into our lives in the form of a puppy.

In March 2021, we lost a companion of 19 years and knew we had to find another companion for our remaining canine, who had never been an “only dog.” We did, so in order to avoid another “Lucy disaster” by the one named “Coco.” Work was temporarily put on hold until completion of the second training round for Coco.

When finally finished, all the stockings will hang by the home hearth for at least one year before going out to new homes. May they long hang by chimneys with care and show the love of a wife, mother, and grandmother to all who see them. It has to be love, because every stitch, every sequin, every bead, and even every eyelash was stitched by hand.

Coco remains a very active and commanding force in our lives, and along with daughter, son-in-law, granddaughter, and grandson moving back to the county, the backing of the stockings was never completed, and the stockings have rested on a table under other projects. But there is a happy ending. I told Sarita, who I hope you remember from the River Street Artisans story. She said she thought they could help us out, to just bring them by.  This is the icing on the cake for me. To know that loving hands worked long and hard to sew each stitch and sequin with love and will be augmented by other loving hands who take such pride in their work. The stockings will hang with love and care radiating from them this year.

Norwood Walker was born and raised in Hurdle Mills and was a member of the last eighth grade class at Hurdle Mills School. He taught at Person High School. After all these years, he is still teaching, but more importantly, he is still learning.