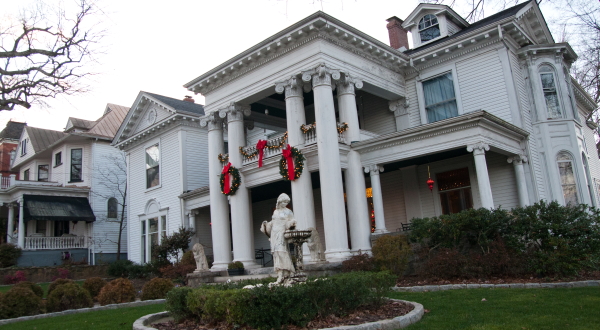 DANVILLE, VA- There’s irony in the changes taking place in Danville, Virginia. Citizens are working to painstakingly return homes and businesses to their original splendor in the Historic District. At the same time, they are working to reinvent the area. The citizens enthralled in the revitalization of Danville seem to have found just the right balance of preservation and progress that will bring prosperity to future generations.

But instead of tobacco and textile money being the driving force, technology will be at the heart of that prosperity. Historians are dubbing this change “the new South”.

Danville began in the late 1700s as a tobacco inspection station because of its location on the Dan River. The town continued to grow and received its charter as a town in 1833. Known as the birthplace of “Bright Leaf” tobacco, the town attracted fame and grew wealthy with its expanding tobacco market. Prosperity continued and grew to include textile manufacturing after the Civil War.

A Story of Riverside

Riverside Cotton Mills was born on the banks of the Dan River in 1882 and became the largest single-unit textile mill in the world – including more mills and a mill village called Schoolfield. The mill founders formed a subsidiary company that operated power generators along the Dan River. In 1909, they combined the two companies to form the Riverside and Dan River Cotton Mills, a name that would remain until 1946 when it became known as Dan River Mills, Inc. In the 1980s, it changed to Dan River, Inc.

The wealth generated by tobacco and textiles manifested itself in the form of mansions along what has been dubbed Millionaires Row. Tobacco and textile barons, bankers, lawyers and other professionals tried to outdo each other, creating mansions that were more like works of art along Main Street.

As overseas competition expanded, tobacco warehouses began to close and eventually caused the demise of Dan River Inc. in 2006. Warehouses, homes, businesses, and cultural venues were boarded up and would most likely remain that way today if it were not for the resilience of Danville citizens. Local government, non-profit, and civic organizations have banded together to revitalize their city.

The Danville Historic Society is playing a vital role in those preservation and progress efforts throughout Danville. Members are not only providing tangible change, they are creating a passion for historic preservation and a sense of community pride.

“The civic and charitable organizations work well together for the good of the community,” said DHS Volunteer Joyce Wilburn, who serves as a board member, corresponding/recording secretary and tour guide for the organization.

The Downtown Danville Association actively engages the citizens of Danville in future plans. They recently hosted a Downtowner Block Party allowing citizens to fill out a questionnaire and have their ideas come to life on the spot by a Graphic Facilitator. All of the information was compiled and presented to city leadership. Ground has also been broken for a new state-of-the-art Danville Family YMCA on the banks of the Dan.

Technology is helping to fuel and attract new businesses, residents, and patrons. An innovative wireless fidelity program (better known as Wi-Fi) is available and free to anyone who is in the “hot zone” downtown. There are more than 40 businesses in the revitalized River District, including technology companies.

The Danville Harvest Jubilee Concert Series at Carrington Pavilion and the River District Festival are just two of the many opportunities designed to draw people into downtown and the River District. The recent Delius@150 Festival celebrated the music of British composer Frederick Delius, who taught at what is known today as Averett University in 1885-86. During his tenure there, he spent some time at Burleigh Plantation on what is now Hyco Lake (see Hyco Lake Magazine Volume 2, 2012).

Also attracting citizens and visitors alike are the established Main Street Coffee Emporium at 547 Main Street (owned by Matt and Leisa Royster for over a decade) and two new dining venues in the Downtown Historic District. Jake’s On Main owners Jake and Connie Eckman offer an upscale casual dining experience, outdoor seating, and a wide variety of domestic and international microbrews at 215 Main Street. 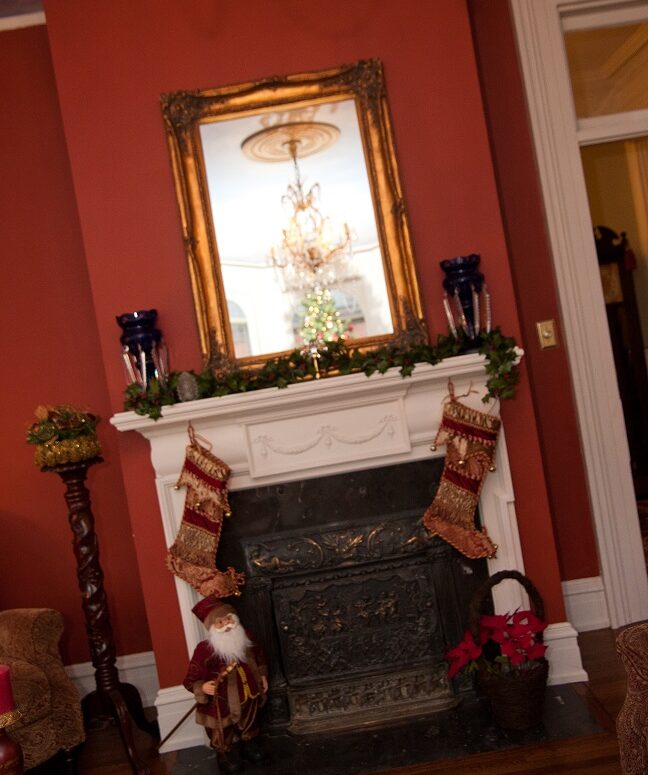 The Story of Millionaires Row

The Eckmans also transformed the R.L. Dibrell House at 124 Broad Street into a bed and breakfast called The II Georges Inn. Serving up breakfast, lunch and dinner is 316 Cibo at 316 Main Street, owners Brandi and Agostino Pugliese offer fresh salads, sandwiches, soups, and coffee in a modern atmosphere.

Millionaires Row and the Old West End residential neighborhood just beyond downtown boast arguably some of the best Victorian and Edwardian domestic architecture in all of Virginia and North Carolina. Many of the old mansions built by the tobacco and textile barons of the late 19th century have been restored. Architectural styles include Victorian, Edwardian, Romanesque, and Gothic Revival.

Danville citizens and visitors alike will enjoy The Secrets Inside guided walking tour, led by Joyce Wilburn beginning in 2009. On the 90-minute walk, Wilburn reveals little-known facts about the mansions and their former residents. She created The Secrets Inside using information from the book, Victorian Danville, written by two local historians, Mary Cahill and Gary Grant.

You will begin your tour on what Joyce calls “Danville’s Front Yard”. The lawn of the Danville Museum of Fine Arts & History at 975 Main Street is at the heart of Millionaires’ Row. Victorian Danville is available for purchase at the Museum.

The Main Street Museum is at home in the mansion built by William T. Sutherlin in 1859, at the onset of Danville’s tobacco prosperity. Daughters of the Confederacy worked to save the structure from demolition in 1912 and thus sparked the now 100-year movement to preserve this historic town.

Sutherlin Mansion was the last Capitol of the Confederacy. It is open for tours Tuesday through Sunday and costs $5 for adults and $4 for seniors and students.

If walls could talk… the house at 926 Main Street would give some interesting commentary. The structure has served as home to a wealthy banker, an orthodontist’s office, and an apartment to Hell’s Angels. It is once again a private residence. In 2003, Paul and Marjory Liepe took on the task of restoring the mansion that now has 24 rooms and 14 fireplaces on four levels.

The original owner, William Fearn Patton, and his family occupied the home just four years before selling it to the Dudley family in 1894. The house remained in that family for 60 years. After Mrs. Dudley’s death a series of owners maintained the property as apartments. In 1965, an organization called the “Committee of 900” preserved the house. 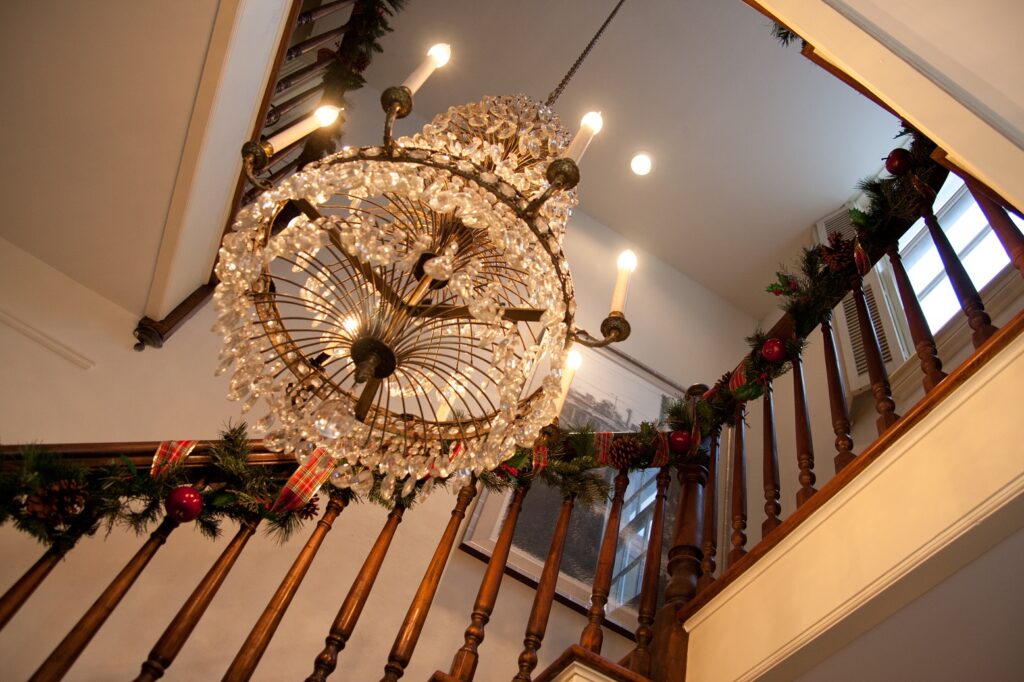 Located at 1002 Main Street is the Wednesday Club. Twelve Danville women came together in 1893 to form the Wednesday Afternoon Club. Miss Augusta Yates, who lived one-half block from Main Street, started out presenting programs on a wide variety of subjects and in the process created an organization that serves the entire community. Members tutor children, provide cultural opportunities, award scholarships, and volunteer throughout the city.

The five architecturally fascinating and unique churches on Millionaires’ Row have given Danville the distinction of the “City of Churches”. Standing at almost any vantage point on Main Street, you can view parts of all five churches. Wilburn will give you a geometry lesson on The Secrets Inside tour as you pass by First Baptist Church. You will be captivated by the unique architecture and craftsmanship of all five churches.

The passion Wilburn shares in her tour will make you consider joining the residents of Millionaires’ Row. Several houses are currently available for restoration.

The Langhorne House, birthplace of Lady Nancy Langhorne Astor, is available for tours on Saturdays 2-5 p.m. Lady Astor was the first woman to sit in the British House of Commons. Contributions are accepted.

To set-up a private or group tour of Millionaires’ Row, contact Joyce Wilburn at 434-770-1974. Reservations are required. Cost is $6 for adults and free for Danville Historical Society members and children under age 12 with a paying adult. Tours are offered at 8:30 a.m., 10:30 a.m. and 1:30 p.m. daily, depending on the weather and excluding major holidays. More adventurous citizens can take the tour via a rented bike.

The Holbrook-Ross Historic District Self-Guided Tour was also created by the Danville Historical Society. Holbrook and Ross Streets were developed in the 1880s just off of Main Street. The Land was partitioned into lots from the estate of Thomas B. Coe.

By the 1900s, the area became the place-to-be for Danville’s African-American professionals. The district is listed on the National Register of Historic Places and the Virginia Landmarks Register. At the entrance to the Holbrook-Ross Historic District is the original building of Sacred Heart Catholic Church, Danville’s first Catholic church, consecrated in 1879.

The Old Grove Street Cemetery was the first cemetery in Danville and is located on Holbrook Street with the main cemetery entrance on Grove Street. The historic landmark serves as a link for different elements of Danville’s early history. A monument in the cemetery honors un-named slaves. 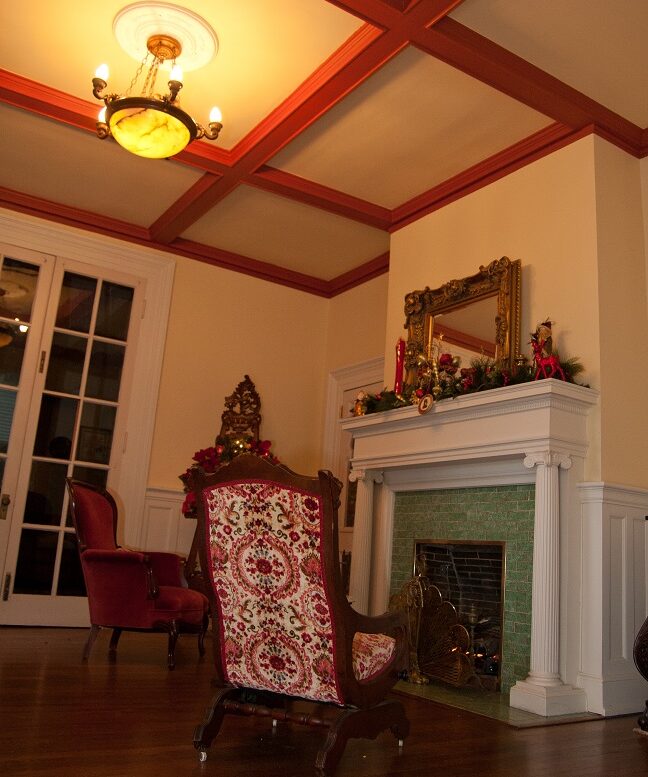 Millionaires’ Row and the Holbrook-Ross Historic District will be linked by a project underway by the Danville Historical Society. A heritage trail complete with brass tobacco leaves inlaid into the sidewalks will guide citizens and visitors through the area.

A grant from the Danville Regional Foundation is making the trail possible. The guided tour begins on a circular stone patio on the lawn of the Danville Museum of Fine Arts & History. The symbolic tobacco leaves will all be in place by February 2013 and will lead patrons through town with the tour beginning and ending at the circular patio. Rack cards and brochures with information about things to do in the area will be available here.

Similar heritage trails are in the works for the Downtown and Tobacco Warehouse Districts.

A Tour of Millionaires Row

A unique opportunity awaits anyone wanting to see first-hand the revitalization and growth taking place in Downtown Danville. The 40th Annual Holiday Tour is set for Saturday and Sunday, December 8-9, 1-5 p.m. both days. The featured properties are spread throughout Downtown Danville, the Tobacco Warehouse District, Millionaires Row and other areas, so patrons must drive to each location.

Organizers work to keep the event fresh for the citizens of Danville with new homes and properties being featured every year. Some of the most popular are always on the annual ticket. One popular Holiday Tour destination is the Penn-Wyatt House at 862 Main Street. The unique character and architectural significance of this home put it on the State and National Historical registers.

In the Tobacco Warehouse District, just minutes from Millionaires Row, is the former Dimon (Dibrell Brothers) Headquarters Building on 512 Bridge Street. Continuing as a vital economic vein in the community, the building is now home to Averett’s Riverview Campus and the Danville Regional Foundation.

Another historic property on the Holiday Tours, the North Theatre at 629 North Main Street, was “discovered” last year by celebrity magician Wayne Alan. He revitalized the property and reopened it for a variety of live shows, including his magic and illusion acts.

The Holiday Tour is $20 per person and will benefit the Coy J. Garbett Preservation Fund, which purchases and/or renovates endangered or abandoned structures. The Fund also provides grants for the same purpose. Tickets can be purchased the days of the event at any of the tour destinations. Coordinators suggest that patrons new to Danville begin the tour at the Penn-Wyatt House.

If you take the Holiday Tour on Saturday, December 8, plan to stay for the Riverview Rotary Christmas Parade beginning at 6 p.m. The “Christmas Toyland” parade starts at Broad and Main Streets and ends at Galileo High School on Ridge Street.